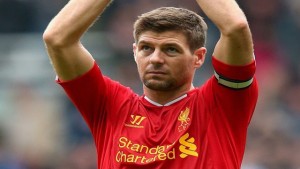 NEWCASTLE UPON TYNE, ENGLAND – OCTOBER 19: Steven Gerrard of Liverpool thanks the support after the Barclays Premier League match between Newcastle United and Liverpool at St James’ Park on October 19, 2013 in Newcastle upon Tyne, England. (Photo by Julian Finney/Getty Images)

Steven Gerrard’s emotional Anfield farewell ended in defeat but it mattered little to the capacity 45,000 fans who packed into Liverpool’s home ground for the 3-1 defeat to visitors Crystal Palace Saturday.

Gerrard, who is leaving the famous English Premier League club after 17 seasons and over 700 appearances, was playing his last home game as a permanent Liverpool player before heading to Los Angeles Galaxy in the MLS.

Some tickets for the match, a routine end of season encounter between Liverpool in fifth and Palace in 12th, had exchanged hands for a rumored $19,000, such is the affection with which former England captain Gerrard is held for his one-club loyalty.

Players from both teams formed a guard of honor as Gerrard walked out before the start of the game to an ear-piercing reception with his daughters, three-year-old Lourdes, nine-year-old Lexie and 11-year-old Lilly-Ella.

Once the match started, Gerrard settled into his normal midfield role and a 26th minute goal from Adam Lallana gave hope of a happy ending for a club legend.

But Palace, revived under new manager Alan Pardew, spoiled the parade and how.

Jason Puncheon leveled just before the break before substitute Wilfried Zaha put the away team ahead on the hour mark after excellent work from the ever dangerous Yannick Bolasie.

Gerrard had glimpse of a fairytale equalizer with a free kick from the range where he had scored many memorable goals, but his effort did not threaten the goal.

Instead, Palace won a late penalty which Glenn Murray took, saw his shot saved by Simon Mignolet but scored on the rebound.

In truth, the result mattered little with all the focus on Gerrard as he was given another raucous ovation by the Liverpool fans at the final whistle.

The players then came back out, all wearing Gerrard’s famous No.8 shirt, with the man himself again accompanied by his children.

Addressing the crowd, Gerrard admitted he had been dreading the moment and said he was “devastated” at the thought he would not being playing in front of the Liverpool fans again.

“I’ve played in front of most supporters around the world, but you are the best,” added Gerrard before a prolonged lap of the hallowed turf to milk the applause of those fans.

He waved one goodbye to the famed Kop, who were singing their trademark “You’ll Never Walk Alone” as one of their greatest ever players made his exit.