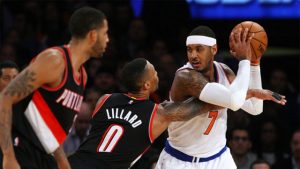 They wanted better than that.

“Tonight I was really happy how we didn’t come out satisfied,” Lillard said. “Winning three out of the five games wasn’t enough for us and everybody was on the same page as far as that.”

Pat Connaughton added 17 for the Trail Blazers, who also won at Memphis, Brooklyn and Washington while losing only in Philadelphia. They needed to come from 17 down in the fourth quarter to beat the Wizards last time out but were in charge of this one most of the way.

“Overall if we would’ve said we could go and win four games, I would have told you I’ll take it,” Blazers guard CJ McCollum said.

Kristaps Porzingis returned from a one-game absence and scored 22 points, but the Knicks were without starting center Enes Kanter for a third straight game because of back spasms. They lost all three, falling back to .500 at 10-10.

The Knicks blew big early leads in the last two losses, in Atlanta and Houston, but mostly played from behind — sometimes way behind — Monday. New York never led by more than two and trailed by as much as 26.

“Any time you lose three in a row you raise your eyebrows to where we’ve got to stop it at some point,” Knicks center Kyle O’Quinn said. “We’ve had momentum at home and handling business at home, but it didn’t work out for us tonight.”

Lillard made the last basket of the third quarter and he won’t have any easier ones all season. Shabazz Napier stole the ball while the Knicks were on the fast break and threw it down to Lillard, who had remained behind on the other end. He dunked the ball with no other players on that side of the court to make it 90-64.

The Knicks couldn’t guard him when they were close by, either. Lillard had 17 points in the third on 5-of-7 shooting.

The Blazers led 30-23 after one and quickly opened a lead the Knicks never cut into. They scored the first nine of the second quarter to open a 16-point cushion, and that’s right it was at halftime after Noah Vonleh’s basket at the buzzer made it 53-37.

“The game was low energy from our guys,” Knicks coach Jeff Hornacek said. “We’re not the team that can just come out there and think we’re just going to play and then step it up later. We have to do it from the tip-off and I don’t think our energy was there for the first three quarters.”

Trail Blazers: Lillard moved past Rod Strickland — also a former Knick — into fourth place on Portland’s career assists list. He now has 2,575 and joins Clyde Drexler and Terry Porter as the only players in franchise history in the top 10 in scoring and top five in assists. … Portland has won nine of the last 11 meetings.

Knicks: With Kanter out, the Knicks activated Joakim Noah and gave him his first playing time since last February, before he was injured and then hit with a 20-game suspension for violating the league’s anti-drug policy. … Tim Hardaway Jr. had 16 points.

Noah checked in to a nice cheer in the second quarter and had a decent three-minute stint, making his only shot attempt and grabbing a rebound. He had been inactive since his suspension ended earlier this month and didn’t even make the two-game trip to Atlanta and Houston.

DOING IT WITH DEFENSE

Portland held an opponent below 100 points for the 12th time, improving to 9-3 in those contests. The Blazers came into the game tied for second in the league for most times holding teams below the century mark.

Check out the team sites for the Portland Trail Blazers and the New York Knicks for more game coverage.