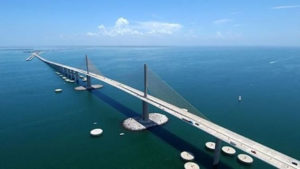 Dubbed the Likoni Floating Bridge, the mega project is estimated to cost at least Ksh1.5 billion.

Spanning a total of 1,058.9 metres in length, the one-of-a-kind bridge will include a 241.5-metre floating section in the middle of the crossing.

KeNHA assured Kenyans that the bridge would be safe even during harsh ocean conditions, with all scenarios factored during the planning phase.

“The bridge has been designed to withstand the typical weather and water conditions of the channel,” the authority’s statement reads in part.

The video demonstrates how the mid-section of the bridge will be movable to allow passage for sea vessels.

In collaboration with the China Road and Bridge Construction (CRBC), KeNHA highlighted delays at the Likoni crossing via ferry as the reason behind the construction of the bridge.

The channel has been notorious for congestion and delays with the more than 320,000 people and 6,000 vehicles forced to bear the brunt as they lack an alternative to connect to Mombasa from the South Coast.

The floating bridge deck which spans 6M in width, will be connected by pins and hinges with guard rails mounted on either side of the deck,

A complex anchorage system mounted on gravity anchors and guard rails will also be installed to ensure safety.

The project involves the construction of pile foundations and a Bailey bridge (a short-term bridge of lattice steel designed for assembly from prefabricated parts) with movable main steel bridge at the middle of the channel to allow movement of ships.

Having commenced on the project in May 20, the bridge has been earmarked for completion by the end of October 2020.

However, the Likoni Floating Bridge is only temporary, hinged in part, to ease movement challenges posed by COVID-19 restrictions ahead of the commencement of the construction of the much more expensive proposed permanent bridge.

“Construction of the floating pedestrian bridge is a high level decision in government response to the COVID-19 pandemic and the human congestion at the Likoni Channel,” reads the project’s brief in part.

The proposed Ksh210 billion Mombasa Gateway Bridge remains a project without a start date, with the development reportedly at the design and consultancy stage.

Floating bridges are essentially boutique structures that only make sense for certain rare kinds of sites: unusually deep bodies of water and bodies of water with very soft bottoms, where piers are impractical.

Norway, which already boasts two of the world’s longest floating bridges, is the one country most actively studying new pontoon bridge projects.

The Evergreen Point Bridge in Seattle, US, is the world’s longest floating bridge. It opened in 2016.

To overcome weather and maintenance issues, the design team raised the Evergreen Point bridge deck 20ft off the pontoons, thereby allowing complete access to all bridge systems from below.

“What made the design a challenge is that a floating bridge tends to flex and twist due to live and environmental loads and thus the superstructure needed to have sufficient articulation so that it could allow for these anticipated movements,” one of the lead engineers, Michael Abrahams, stated at the time.