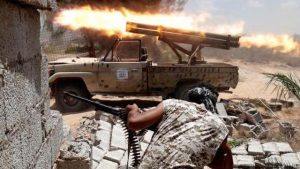 Libyan forces renewed their push to oust Islamic State from its former North African stronghold of Sirte on Sunday, saying they had seized the city’s main mosque and a jail run by the militants’ morality police.

The forces, mainly brigades from the city of Misrata, say they are close to capturing Sirte after taking most of the city in a three-month campaign and restricting militants to a shrinking residential area in the city center. Since Aug. 1, they have been supported by U.S. air strikes.

Fighters backed by heavy artillery and tanks advanced early in the day in Bufaraa neighborhood, seizing a building used by Islamic State’s morality police as a prison, said Rida Issa, a spokesman.

The media office said “dozens” of bodies of Islamic State fighters were found in newly captured areas, although it did not give a specific number and it was not clear when the militants were killed.

As of Thursday, the United States had carried out 65 air strikes over Sirte, according to U.S. Africa Command, most recently against a supply truck, a vehicle-borne improvised explosive device and three enemy fighting positions.

The strikes have accelerated the progress of Libyan forces, whose advance had been slowed by suicide bombings, snipers and mines.

Islamic State took control of Sirte last year, setting up a proto-state modeled on its practices in Iraq and Syria and enforcing its ultra-hardline rule on residents.

Losing the city would be a major blow for the group, although militants who escaped or are based elsewhere in Libya are expected to keep trying to exploit the country’s political turmoil and security vacuum.