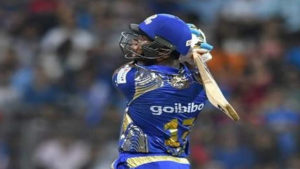 Sent in at the Wankhede Stadium, the hosts piled up 213 for six from their 20 overs with Captain Rohit Sharma top-scoring with 94 from 52 deliveries and the left-handed Lewis supporting with 65 off 42 deliveries.

Mumbai were tottering when they lost wickets off the first two balls of the innings without a run on the board before Rohit and Lewis combined in a thrilling 108-run partnership to ignite the recovery.

Rohit smashed 10 fours and five sixes while Lewis counted six fours and also five sixes, to extend his decent form in the tournament.

Lewis was third out in the 12th over, toe-edging a skyer to wicketkeeper Quinton de Kock off New Zealand fast bowler Corey Anderson.

Lewis’s West Indies teammate, Kieron Pollard faced seven balls for his five before holing out to long on off England seamer Chris Woakes at the start of the penultimate over.

In reply, RCB were held to 167 for eight with only captain Virat Kohli showing an enterprise with an unbeaten 92 off 62 at the top of the order.

Mumbai had lost their opening three games of the tournament.