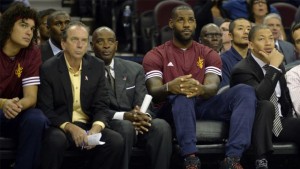 LeBron James says he won’t be sitting on the bench when the season tips off Tuesday.

INDEPENDENCE, Ohio — His lower back feeling better, his body refreshed, LeBron James declared himself ready for his 13th NBA season.

After sitting out nearly two weeks since undergoing an anti-inflammatory injection, James was able to fully participate in Cleveland’s practice for the second straight day and said he’ll play Tuesday in the season opener at Chicago.

James had been limited in practice since receiving the shot Oct. 13, the second injection he has gotten in 10 months. The four-time MVP took some contact Sunday and said the big test would be how he responded after the workout. Although he didn’t get into any specifics, James feels good enough to take on the Bulls.

The 30-year-old was asked if he ever worried he’d have to miss the opener.

But while the superstar will play, Cavaliers coach David Blatt said the team will closely monitor James’ minutes.

The Cavs understand the grind ahead and want to be mindful that James can’t put the same demands on a body that has logged nearly 44,000 minutes and untold mileage as a pro. He averaged a career-low 36.1 minutes per game last season, and that number could be reduced this season.

“He won’t have a specific limit minutes-wise,” Blatt said. “On the other hand, we will be cautious and careful and not overplay.”

Cleveland’s season will open with three games in four days. After facing the Bulls, the Cavs will play in Memphis before hosting Miami in the home opener Friday night.

And while the opening-night matchup pitting the two Eastern Conference rivals will certainly draw major interest and a large TV viewing audience, James isn’t letting himself or his teammates get caught up in the hype. It’s just one of 82.

“We’re not going to put too much on the first game of the season,” he said. “We’ve put in a lot of work over the last few weeks, and you can only try to get healthy, work your habits, work your rhythm and our last few practices have been very good. But you don’t put too much onus on if this will be the team that we’ll be long-term tomorrow.”

The Cavs will begin the season missing All-Star guard Kyrie Irving, who is still recovering from surgery on a broken kneecap and may be weeks away from his debut. Cleveland will welcome back forward Kevin Love, who missed most of the playoffs after dislocating his left shoulder in the first round against Boston.

“I did everything leading up to be ready for this,” said Love, who re-signed with the Cavs as a free agent this summer. “My body feels good and now is just the time to get to work for the real thing.”

Despite being undermanned, Cleveland pushed Golden State to six games before losing in last season’s NBA Finals. With a deeper roster, the Cavs believe they can get back and the journey begins in Chicago.

“We’ll be on the road. It will be us, our traveling staff, our traveling team against those 20,000 fans and the Bulls, so it’s going to be a tough environment,” Love said. “When that ball goes in the air, I think we’ll be ready.”