Home / Sports / LeBron on super-teams: ‘Teams get together … across the league to try to beat me’ 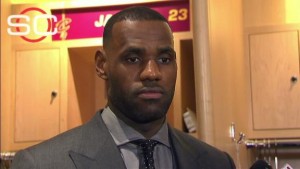 LeBron James knows a little bit about the formation of super-teams in the NBA, so when he speaks about what’s really going on, we should probably listen.

James, of course, bolted Cleveland for Miami in the summer of 2010 to join Dwyane Wade and Chris Bosh to make the Heat the premier power in the East. But that was done after multiple attempts to recruit players to the Cavaliers, at a time when Cleveland didn’t have the cap space to assemble that type of talent. And James was just reacting to the Boston Celtics, who had added Kevin Garnett and Ray Allen to Paul Pierce’s squad in advance of the 2008 season.

Now that LeBron has taken whatever team he’s been on to the Finals in six consecutive seasons, he sees himself as a man with a target on his back — and believes that every team in the league spends every offseason trying to come up with a roster talented enough to beat him personally.

“I know teams switch and pick up new coaches or new players, and their whole goal is kind of they want to beat me,” James told cleveland.com. “It’s never just about me, but I always hear them saying, ‘We gotta beat LeBron.’ It’s not just me on the court, but I understand that teams get together in this conference and across the league to try to beat me.”

Stephen Curry may have won the past two MVP awards, but there are very few people who don’t consider LeBron James to be the best player in the league. And since he and the Cavaliers are favored to get to the Finals once again, it seems as though James is absolutely right.