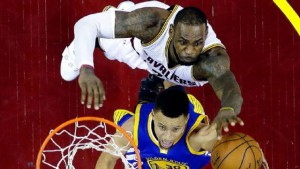 CLEVELAND — This was the version of LeBron James that Mike Miller had seen before, a mode that has been activated just frequently enough for Miller to give it a name: “Ain’t gonna lose.”

“He ain’t gonna lose,” LeBron’s friend and former teammate repeated as he walked out of Quicken Loans Arena, where James had just put together his second consecutive 41-point game — with 11 assists, eight rebounds, four steals and three blocked shots to boot — to send his Cleveland Cavaliers back to Oakland for a championship-deciding Game 7 against the Golden State Warriors.

Miller was along for the ride as James’ teammate for these kinds of performances in the Miami Heat’s first championship run in 2012. Forty-five points and 15 rebounds in Game 6 at Boston in the Eastern Conference finals. Forty points, 18 rebounds and nine assists in Game 4 in Indianapolis after the Heat fell behind 2-1 in the previous series. James did not allow his team to lose those games on his watch, and now he has barred the Warriors from stepping through the door for their second consecutive championship.

“He ain’t gonna lose Game 7, either,” Miller said. This is the latest and the greatest challenge for the Warriors. They battled historical standards all season and kept prevailing. Now they’re up against an all-time great player who is very much in the present, who is trying to make history of his own by making his team the first to come all the way back from a 3-1 deficit in the NBA Finals. (Only two of the previous 33 teams to fall behind 3-1 even forced a Game 7.)

James’ performance also dwarfed a stellar effort from Stephen Curry, who scored 30 points in what became only the Warriors’ third loss in the 20 playoff games in which he has reached that plateau. But LeBron’s greatness meant that for all of Curry’s shot-making the Warriors were still outscored by 11 points while he was on the court. James, meanwhile, was plus-26.

“He’s playing great,” Curry said. “He’s doing things that are game-changing and helping his team win. He’s been more aggressive shooting the ball.” LeBron also seemed to have some extra zeal in blocking a Curry layup attempt, then turned over his shoulder to mouth some words at Curry.

It wasn’t the most frustrating moment for Curry, who picked up his sixth foul while trying to steal a pass intended for LeBron, then threw his mouthpiece in anger, striking a fan with it. It drew a superfluous ejection after the foul out, and certainly will draw a fine. A suspension for Game 7 is theoretically possible, but would the NBA really deprive fans of the reigning MVP without a history of misbehavior in a winner-take-all game?

Warriors coach Steve Kerr’s bank account will be at least $25,000 lighter as well after he pointedly critiqued three of the fouls called on Curry in addition to griping that the Cavaliers are constantly holding his players when they cut through the lane.

He didn’t go so far as to hang the loss on the officiating. He knew the real culprit was the Warriors’ dismal first quarter, in which they shot 23 percent overall (1-for-9 on 3s) and scored only 11 points. They fell behind by 22 points, too big a hole for Curry plus a 15-point third quarter from Klay Thompson to overcome.

Every time the Warriors had a glimmer of hope, reducing their deficit to single digits in the fourth quarter, LeBron snuffed it out. He scored or assisted on 27 consecutive Cavaliers points during a stretch in the second half. And he addressed his only flaw in Game 5 — his shot faltered when the minutes accumulated — with a 17-point fourth quarter, featuring 6-for-9 shooting, four assists and two blocked shots.

He looked tired — he could barely get the ball over the rim after one pass from Kyrie Irving gifted him a layup — but refused to sit down until the outcome was assured with a 21-point lead and two minutes remaining.

“With our season on the line, at the end of the third quarter, he said, ‘I’m not coming out,’ ” Cavs coach Tyronn Lue said. “I didn’t have any intention of taking him out anyway. I don’t care what y’all say.” Leaving LeBron in while he’s at peak levels is a rare coaching decision that not even the social media age could shred.

LeBron himself should be beyond any shade at this point, after the way he kept the injury-riddled team competitive in last year’s Finals, and the way he has tilted this series. When ranking NBA players, the question you should ask is which one would you pick first if you had to win a playoff game? No one in this decade comes ahead of LeBron.

The Warriors get to head home, which at the moment is their greatest benefit from winning a record 73 games during the regular season. Home teams have won 15 of the previous 18 Game 7s in the NBA Finals. Decades of NBA history against the man of the moment. “I’ll take it,” James said. Seems like a fair enough fight.