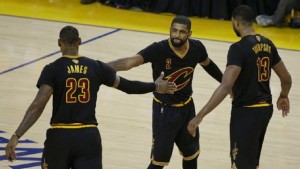 OAKLAND, Calif. -– Facing elimination following a devastating home loss in Game 4 of the NBA Finals, Cleveland Cavaliers head coach Tyronn Lue told his players to not bother getting on the plane to California if they didn’t think they could win Game 5 against the vaunted Golden State Warriors.

The belief was there, all right, on Monday as the Cavs came into Oracle Arena and took the game from the Warriors, handing Golden State just its fourth loss in 54 games in its building since the start of the 2015-16 season.

Cleveland’s 112-97 win sends the series back to northeast Ohio for Game 6 with the Warriors one win from the championship -– just like what happened last year. This time, though, the momentum appears to be squarely in the Cavs’ favor.

LeBron James was, in a word, magnificent. For those clamoring to see “dominant LeBron” once again, his 41-point, 16-rebound, seven-assist, three-steal, three-block night is Exhibit A in the case for why he still can lay claim to the “best player in the world” status. According to Sports Illustrated’s Ben Golliver, those numbers hadn’t been matched in the playoffs in all five categories for more than 30 years.

Kyrie Irving, picked apart for wilting in the fourth quarter of Game 4, shined as bright as he ever has, scoring 41 points on 17-for-24 shooting with six assists, providing answer after answer when Golden State tried to cut into the Cavs’ second-half lead, which ballooned to 11 in the third quarter and actually grew from there.

It was the first time in the history of the Finals when two teammates scored 40-plus points in the same game, according to research by Elias Sports Bureau.

The Cavs’ defense, granted a reprieve for one night from facing the multidimensional Draymond Green –- out for the game with a suspension for his hit on James in Game 4 -– was inspiring, holding the Warriors scoreless from the 6:29 mark of the fourth until 1:01 remaining on an Anderson Varejao free throw, when both teams’ starters had long been pulled with the game already decided.

The Warriors shot 36.4 percent from the field for the game and had 17 turnovers. Outside of James and Irving, the Cavs didn’t have much going for them, but it’s not like they needed it. Kevin Love, back in the starting lineup, had just two points on 1-for-5 shooting and three rebounds. Tristan Thompson grabbed 15 rebounds but shot just 4-for-10 from the line. J.R. Smith started 3-for-4 from the field, then went 0-for-5.

The series is a series again, and with Andrew Bogut’s health in question after hurting his left knee, plus Green’s impending return, it is likely to take on a new look and complexion in Thursday’s Game 6.

The Cavs got on the plane and made their cross-country trip worth it. The flight back home is sure to be an enjoyable one.