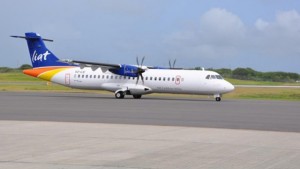 Antigua & Barbuda on Monday said it will resist further efforts to have the base of regional airline, LIAT moved from Antigua to Barbados with Prime Minister Gaston Browne appealing to his regional colleagues to “leave us with LIAT.”

Browne told the inaugural edition of OBSERVER PM that his government is “fighting” to have LIAT remain here although it knows that “from a legal standpoint we don’t have the shareholding capacity.”

“They are literally pulling, and have pulled to some extent, the rug from under our feet over the years and we are not looking to resist any such further move,” Browne who is also the country’s minister of finance said.

He made an impassioned plea to fellow shareholding governments, asking them to consider that “all we export from this country is LIAT.”

“We buy flour from St Vincent; we buy juices from Barbados; vegetables from Dominica and all I am saying to them, leave us with LIAT.”

Browne said while the major shareholding governments of LIAT had legal right “we have every right to defend what’s in the best interest of Antigua & Barbuda.”

In mid-February the airline announced its intention to rebase two aircraft currently stationed in Antigua to Barbados. Prime Minister Browne said the move was part of a systematic plan to disenfranchise the country.

After LIAT announced the changes, Browne wrote to Chairman of LIAT Shareholder Governments, Dr Ralph Gonsalves asking him to put a stop to the rebasing efforts until Cabinet could discuss the matter.

LIAT has also announced plans to part ways with close to 200 employees.

Speaking on the planned retrenchment, Browne said the company should consider the least painful option.

“Now with St Vincent going into an election this year, if LIAT is going to retrench (do) you think the Prime Minister of St Vincent is going to want to let go anybody in St Vincent? Barbados has the majority shares; they say they want more business. (Do) you think they’re going to allow anybody from (Barbados) to go? At the end of the day it is Antigua and Barbuda that will be affected,” Browne said.

He reiterated his view that the move would have negative impact on the local economy and appealed to workers “to start to put their business in order because I guarantee you, it will be a total meltdown and destruction of LIAT.”

LIAT is owned by Caribbean governments, with the majority being the governments of Barbados, Antigua & Barbuda, St Vincent & the Grenadines and Dominica.