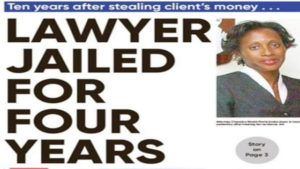 Lawyer broke down crying after she was sentenced to 4 yrs in jail for stealing $302 000 from a client who gave her the money to buy a condo. Sounds familiar uh?
For the second time in 12 months in Barbados, an attorney has been sent to prison for stealing a client’s money.
This time it is disgraced lawyer Cheraine Nicole Parris, who will spend four years for bilking her client out of almost half-million dollars ten years ago.
“This is not a little amount,” Justice Randall Worrell told her. “This is a considerable amount of money, however one looks at it. In addition to that, the more aggravating feature is that you were placed in a position of trust and you breached that trust considerably. So there must be a sentence of imprisonment,” he said.
However, unlike attorney Vonda Pile, who was stoic as she was sentenced to three years, Parris broke into loud sobs and wails when she heard her fate in the No. 2 Supreme Court yesterday.
Parris, of Lowlands, Christ Church, had pleaded guilty to stealing $302 000 belonging to Ashleigh Morrison between April 15 and August 20, 2010. She had originally been charged with stealing $462 000 but was indicted for the lesser amount after she repaid the difference.
She also admitted engaging in money laundering in that she disposed of $302 000, between April 15 and August 16, 2010, being the proceeds of crime.
She was represented by attorney Angella Mitchell-Gittens, while Deputy Director of Public Prosecutions Alliston Seale prosecuted.
Parris’ guilty plea came after more than five years of appearances, adjournments before the High Court and promises to pay the money.
What made the case so serious, said Justice Worrell yesterday, was that Parris had made no attempt to repay the outstanding balance.
“I don’t think that anyone can complain. You had from 2010 to 2020 to try to see if you could pay back this money.
“The date of this offence is April 15, 2010. We are now at September 2020. Even if you were paying back $3 000 a month, you would have exceeded the amount for which you have been placed before this court,” he said.
“Ten years have gone. So if you didn’t get $302 000 in ten years, are you going to get it in 60 days?” the judge asked, as he noted Parris’ breach of trust had had a detrimental effect on the complainant’s health.
He told Parris he had, however, considered her guilty plea and that she had a clean record. But those, he added, were the only two mitigating factors in her case.
Justice Worrell said he had determined that the starting point should be six years and he had given her the one-third discount for her guilty plea. He then ordered that Parris serve the remaining four years for the offences.
Prosecutor Seale, in his submissions on sentence, said Parris’ matter should be a lesson to young attorneys about “never hanging your hat higher than you can reach”. He said many young lawyers entered the profession with delusions of grandeur and felt they needed to live “the lawyer lifestyle”.
Meanwhile, Mitchell-Gittens said Parris had been struggling personally and professionally since she was apprehended for the theft.
“If it were in her power to repay Ms Morrison, she would have,” defence counsel said.
It was in September 2019 that attorney Vonda Pile was found guilty and jailed for three years for stealing US$96 008 between April 29, 2009, and October 26, 2010, from Bajan/New Yorker Anstey King. She was found not guilty of money laundering.
Since then she has appealed her conviction and sentence, is on bail and back practising at the Bar. (HLE)