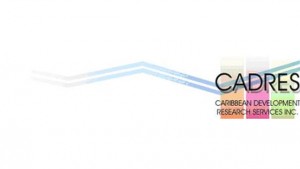 KINGSTOWN, St Vincent — Ahead of the general election in St Vincent and the Grenadines (SVG) on December 9, 2015, Barbados-based Caribbean Development Research Services (CADRES) has released the results of a political opinion poll it conducted on the mainland island of St Vincent.

The poll was conducted between November 20 and 22 to gauge the likely voting behaviour of Vincentians. During that time period, face to face interviews were conducted with approximately 800 persons spread evenly across the 13 mainland constituencies. The survey was designed to achieve a margin of error of +/- 5% with regard to the mainland island of St Vincent.

Cumulatively, 58% of respondents indicated that at this time the issues of greatest concern to them were jobs/employment, the cost of living and the economy. Some 11% were concerned about crime and the remaining respondents were preoccupied with other issues such as health, education, roads and housing.

The popularity of the two potential leaders was explored on this occasion by way of a direct question asking respondents which individual they would prefer to be led by and some 61% expressed a preference for Prime Minister Ralph Gonsalves, while 37% preferred Opposition Leader Arnim Eustace, with 2% preferring other individuals.

CADRES noted that these results are consistent with a previous (unpublished) survey conducted in October 2015 before the election date was announced. It is also noted that in 2010 CADRES released a pre-election survey for St Vincent where Gonsalves was preferred by 52% of Vincentians and Eustace 36%.

However, notwithstanding the reported comparative popularity of Gonsalves ahead of the last elections on December 13, 2010, his Unity Labour Party (ULP) achieved only a narrow eight to seven seat victory in the 15-seat parliament.

In the latest CADRES survey, some 43% of respondents indicated they intended to vote for the ULP, while 28% said they will be voting for the New Democratic Party (NDP) and 29% of respondents were either unsure of their voting intentions or preferred not to say.

CADRES said that, on previous occasions, it has successfully estimated where this “Uncertain Support” is likely to fall based on the electoral history of St Vincent and its formula projects a likely national swing of +5% in favour of the ULP, with a commensurate deterioration in the fortunes of the NDP.

“On this present track therefore the ULP is likely to emerge victorious on December 9, 2015,” CADRES said.

This projection is based on stated voter intentions last weekend, which could be modified (in either direction) in the remaining days before voting. In 2010, CADRES’ pre-election poll projected a swing of -3% against the ULP, but that the ULP would nonetheless retain office and on that occasion there was a decline of -3.4% in the fortunes of the ULP.

CADRES said it does not anticipate that it will conduct any further polls prior to the December 9 election.

Some SVG sources have dismissed the CADRES survey on the grounds that its director, Peter Wickham of Barbados, is conducting the election for the ULP and his company was paid by the ULP for the survey, with such polls only being released when they are in favour of Gonsalves.