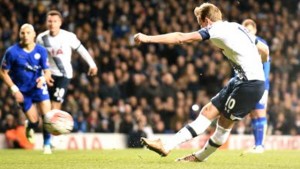 LONDON, England (AFP) — Substitute Harry Kane earned Tottenham Hotspur a 2-2 draw at home to Leicester City yesterday with an 89th-minute penalty that kept his side in the FA Cup.

Spurs took an early lead through Christian Eriksen in the third-round tie, before goals from Marcin Wasilewski and half-time substitute Shinji Okazaki put Leicester in control.

But after Nathan Dyer was adjudged to have handled the ball in the closing stages, England striker Kane, 22, slammed home a late spot kick to take his Tottenham tally to 50 goals.

The teams now face a replay at the King Power Stadium, but not before crossing swords again in the Premier League at White Hart Lane on Wednesday.

Both teams made wholesale changes — eight for Tottenham, seven for Leicester — and while the hosts left Kane on the bench, Jamie Vardy was absent for the visitors after undergoing minor groin surgery.
The game’s first opportunity, in the eighth minute, yielded its first goal.

Tom Carroll set Josh Onomah scuttling into the Leicester box on the left and, although his deflected shot was boxed away by Kasper Schmeichel, Eriksen collected the rebound and drilled home.

Leicester equalised 11 minutes later through Wasilewski, who stole in front of Toby Alderweireld at the near post to meet Leicester debutant Demarai Gray’s right-sided corner with a glancing header.

Spurs were quick to get back on top, but for all their possession, the only chance of note that they created before half-time was a shot from Eriksen that Schmeichel, his Denmark teammate, fielded comfortably.

Leicester manager Claudio Ranieri made a bold change at half-time, sending on Okazaki for central midfielder N’Golo Kante, and it paid off almost instantly.

Moments after Spurs goalkeeper Michel Vorm had tipped a looping header by Yohan Benalouane over the crossbar, a pass from Andy King set Okazaki running into the box from the left.

The Japan international flummoxed Alderweireld with a brilliantly deceptive step over and; although his initial effort was blocked by Vorm, he followed up to lash home the rebound with his left foot.

Nacer Chadli twice threatened to level for Spurs, heading over from Son Heung-Min’s mishit shot and then shooting straight at Schmeichel.

But Dyer and the enterprising Gray both came close to extending Leicester’s lead with shots from outside the box that narrowly missed the target.

Initially it seemed fate was set against Spurs with Alderweireld shooting over, Schmeichel palming away a long-range effort from Bentaleb and Alli lofting a header wide.

But with time running out, Dyer was penalised after Danny Rose’s attempted pass flicked off his heel and brushed his hand, and Kane emphatically commuted the sentence from the penalty spot.