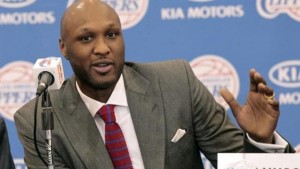 Reuters – Former NBA player and reality television star Lamar Odom was reported to be on a respirator and fighting for his life in a Las Vegas hospital on Wednesday after being found unresponsive at a Nevada brothel.

Odom, 35, the ex-husband of Khloe Kardashian, suffered a medical emergency on Tuesday at the Love Ranch in Crystal, Nevada, about 80 miles (50 kms) northwest of Las Vegas, the Nye County Sheriff’s Office said.

Odom, who starred for the Los Angeles Lakers from 2004 through 2011, was taken to Sunrise Hospital in Las Vegas, the statement said.

Sunrise Hospital could not be reached for information on his condition. But celebrity website TMZ.com, which broke the news of the emergency, cited unidentified sources on Wednesday as saying Odom was in a coma and that some of his organs were failing.

Kardashian, whose whirlwind romance with Odom was captured in the reality show “Keeping Up With the Kardashians” and its spin-off “Khloe and Lamar” is at his bedside, TMZ and Us Weekly reported. The couple split in 2013 after four years of marriage and their divorce was finalized in July.

Odom’s publicist and friend Eve Sarkisyan said in a statement that “family and friends are extremely concerned for Lamar.” But she warned against “false information being circulated unofficially.”

Odom’s sport management agency, Excel, said on Wednesday that it was “keeping him in our thoughts and prayers” but had no additional information or comment.

The owner of the Love Ranch, Dennis Hof, said Odom had arrived at the legal brothel on Saturday. “He was polite and reserved and he told multiple employees that he was there to get some privacy and spend some time relaxing,” Hof said in an email.

Hof said brothel staff reported that Odom had been taking herbal sexual enhancement capsules but no illicit drugs were found in the basketball player’s room.

The 6-foot-10-inch (2.08 meters) Odom also played for the Los Angeles Clippers, Miami Heat and Dallas Mavericks during his 14 seasons in the NBA but currently is not attached to any team.

In 2013, he pleaded no contest in Los Angeles to a charge of driving under the influence and was ordered to complete three months of rehabilitation for alcohol abuse.