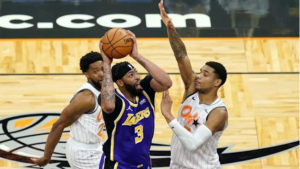 The look shot across the Lakers defenders’ faces too many times. It was a mixture of annoyance and disbelief, of confusion and frustration. Someone wasn’t where they were supposed to be. And someone on the other team got an easy basket because of it.

Twenty miles southwest of the Amway Center, where the Lakers scrapped their way through a 114-103 win Monday, the team won a championship in their last trip to Orlando, Fla. It was a run defined by their chemistry and toughness, the Lakers’ ability to make the best of a bad situation better than anyone else.

It’s the recipe for repeating, and with just 11 games left on the schedule and a superstar still missing, no one can be sure whether the Lakers will be able to recapture their Orlando magic.

A season ago, it was partly born out of necessity. The Lakers had to navigate international controversy and unspeakable tragedy — and that was before the season shut down because of the coronavirus pandemic. Forced to live with one another on a closed campus for 100-plus days, the Lakers had to be connected.

But this year, injuries have kept the Lakers from being together on the floor (their likely starting five have yet to play a single minute together). And off the court, health and safety protocols have limited interactions, forcing the team to try and figure out ways to work well with one another.

Luckily, the basketball gods sometimes provide gifts like Monday, what should’ve been an easy win against the very bad, very young Magic quickly becoming a fight. The Lakers led by as many as 16 in the first half, but their defense cratered into itself, allowing Orlando to make 10 of 11 shots to start the second quarter.

But they didn’t completely crumble.

“Our second quarter was terrible on both ends of the floor,” Anthony Davis said. “We’re still trying to figure things out. … It’s always tough to win in this league, especially when we’re trying to build our chemistry, so it kind of puts us behind the eight-ball even more. But we’re still figuring it out, and the good thing about it, we were able to get a win while doing so.”

For the Lakers, Monday’s victory snapped a three-game losing streak and marked their first win since Davis returned to the team after a 30-game absence. He continued to look more like his former self, even hitting a three in the fourth quarter — his first make from deep since Feb. 6.

Davis had called the game a “must win” after the Lakers dropped two straight in Dallas, putting the Mavericks hot on their heels in the Western Conference standings.

The Lakers responded, dominating the first quarter behind Davis’ three-for-three start and Dennis Schroder’s ridiculous plus-17 in his nine minutes to open the game. And while they were solid enough in the third, it was Schroder’s 13 fourth-quarter points that secured the win.

While Davis’ lower leg and LeBron James’ ankle have robbed the Lakers of an opportunity to try and replicate last season’s on-court chemistry, the injuries have also provided a lot of space for Schroder.

“He’s really growing [in] particular with his floor-general mentality and running the team,” Lakers coach Frank Vogel said. “Ten assists, two turnovers and 21 points — seemed in control and comfortable in the pick-and-roll game and getting everybody involved.”

He’s averaging 17.9 points and 8.5 assists in the Lakers’ last 10 games, playing in ways the Lakers hope can be sustained even when James comes back to take control of the offense. And Schroder, offering the closest thing to an official update since James injured his ankle on March 20, said James should be back soon.

“I know,” he said of James’ pending return. “It’s probably the Lakers organization who is going to tell you guys. I mean, he’s close. I can tell you that much.”

It’s the one thing that has to happen between now and the playoffs — James’ return — an absolute must if the Lakers are going to try and recapture their Orlando glory from the bubble.

But just because he’s back and the roster will be whole, it doesn’t mean the Lakers will be together. Figuring that out before the playoffs start is the biggest challenge left.