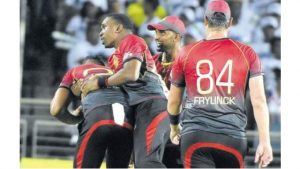 For a second time in this year’s fifth staging of the Hero Caribbean Premier League (CPL) Twenty20 tournament, Jamaica Tallawahs were asked to chase 208 and again failed to do so.

Just before arriving in Jamaica for their home leg, the Tallawahs were handed a sound 37-run defeat by the Chris Gayle-captained St Kitts and Nevis Patriots when chasing the target at Warner Park.

And on Saturday night at Sabina Park, in the 24th match of the tournament, the Tallawahs went down by 36 runs to Trinbago Knight Riders, who posted 208-6 — the joint highest total of the season.

The win for the Knight Riders, which was set up by an electrifying innings of 91 off 62 balls by New Zealander Brendon McCullum, took on added significance as they solidified their post atop the standings on 16 points.

The Tallawahs, who were suffering their third defeat of the season, remain in third position on 10 points, having been led by a second-consecutive half-century by Captain Kumar Sangakkara, who made 53 off 36 balls.

They will now be hoping for a victory to secure a play-off spot, when they meet the Patriots in the third of four home games on Wednesday.

Coming off a convincing six-wicket win over St Lucia Stars on Friday, the Tallawahs entered Saturday’s contest bubbling with confidence.

That confidence would have been further reinforced when Krishmar Santokie had Sunil Narine caught off the first ball of the innings by Odean Smith, after Sangakkara won the toss and inserted the visitors.

However, they were made to toil thereafter as McCullum and Colin Munro orchestrated an aggressive 92-run, second-wicket partnership, despite the pace aiding the pace bowlers on an even batting surface.

And even after Munro went caught by Lendl Simmons off the bowling of Rovman Powell for a well-played 42 off 24 balls, including two fours and three sixes, the Knight Riders were cruising at 92-2 at the end of nine overs.

McCullum, who struck five fours and six sixes in his calculated knock which took him to the top of the run-scoring leader board, found another worthy ally in Darren Bravo. Together they added 63 runs for the third wicket.

When Bravo went caught by Andre McCarthy off Powell’s bowling for 28 off 13 balls, the score was 156-3 after 15 overs, and by the time Kesrick Williams had McCullum caught in the deep by Simmons with the score at 191-5, the writing was already on the wall for the Tallawahs.

The Knight Riders were willing to take risk in an attempt to maximise on the short boundaries and as such steamrolled the Tallawahs bowling by hammering 10 fours and 14 sixes in the mammoth total.

Powell with two for 38 from four overs had the best bowling figure for the Tallawahs, while Santokie ended with two for 44.

In their reply, the Tallawahs needed to score at least 10 runs per over to stay abreast of the required rate, but the chase got off to a disastrous start.

They lost young New Zealander Glenn Phillips for a duck when he stepped out to left-arm spinner Nikita Miller and was beaten down the leg side for Denesh Ramdin to complete the stumping.

Like he did in the previous game, Sangakkara came to the crease and the very first ball he faced raced into the boundary ropes. From there it was an all-out assault by the former Sri Lankan wicketkeeper/batsman, who formulated an 52-ball 85-run, second-wicket stand with Simmons, which even pushed the Tallawahs ahead of the required rate at one stage.

After being dropped by Darren Bravo off Ronsford Beaton on 34 and again on 37 by McCullum off Captain Dwayne Bravo, Sangakkara brought up his half-century with a boundary off Robert Frylinck in the ninth over.

He went two balls later while attempting a ramp shot bowled by the South African all-rounder. He had six boundaries and two sixes in his knock.

Before that Simmons got in on the act, slamming one four and three big sixes one of which was hit outside of the park and onto South Camp Road in his knock of 32 off 19 balls.

However, when he was dismissed behind Sangakkara, the Tallawahs never recovered.

Rovman Powell tried to get the job done, but would eventually buckle under pressure for 30 off 21 balls, while the in-form Andre McCarthy also came up short with 21 off 12 balls.