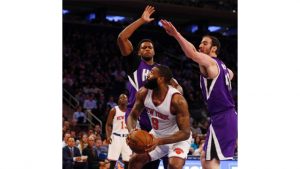 NEW YORK — They were bad enough to allow 18 straight points yet still good enough to win.

That’s all that matters to the New York Knicks, who ended up on the right side of the scoreboard and found beauty in an ugly game.

Derrick Rose and Carmelo Anthony each scored 20 points and the Knicks held off the Sacramento Kings 106-98 on Sunday night for their eighth win in 11 games.

The Knicks took a 21-point lead in the first half, surrendered an 18-0 run in the third quarter but outplayed the Kings down the stretch to win their third straight overall and improve to 9-3 at home.

“The main objective and the goal is just to get wins. I don’t think nobody cares about stats or anything like that,” guard Brandon Jennings said. “As long as we win we’re happy, but we’ve got to getter. I mean we haven’t blew anybody out yet, so hopefully we can get a blowout game where other guys can play.”

DeMarcus Cousins had 36 points and 12 rebounds for the Kings, but shot just 9 for 30 and tired late while playing the entire second half.

“Coach tried to take me out at the end of the third with like a minute left. I begged him could I stay in,” Cousins said. “I thought he was going to take me out at the beginning of the fourth but he stayed with me. Just tried to stay aggressive and keep pushing. It was a tough one tonight, but I like our team’s effort. I liked that we kept fighting.”

The Knicks used an 18-4 run to expand a seven-point lead to 48-27 midway through the second quarter and had a 19-point cushion in the third before suddenly sending the Kings to the foul line too much and not scoring at all, as Sacramento’s 18-0 run cut it to 72-71 late in the period.

Leading by two with just under five minutes left, the Knicks got a 3-pointer by Anthony to start a 7-2 spurt that finally put it away.

Sacramento dropped its third straight on its road trip that was shortened to five games after a game in Philadelphia was postponed because of unsafe court conditions.

Kings: The Kings intentionally fouled Joakim Noah away from the ball twice down the stretch and it worked — defensively, at least — as he missed all four free throws. But Sacramento couldn’t follow up either time with a basket. … Sacramento had its four-game winning streak against New York snapped.

Knicks: Noah returned after missing two games with a sprained left ankle, but fellow starter Courtney Lee missed his second straight with the same injury. Hornacek said the guard was feeling pretty good but still having trouble moving side to side. … Anthony left in the first quarter and went to the locker room area for treatment of a cut lower lip.

Among the struggling Kings were Kosta Koufos (1 for 7), Matt Barnes (1 for 11) and Arron Afflalo, who went 1 for 4 in his return to New York after playing for the Knicks last season. The Kings shot 32 percent.

When the Kings finally get home from their road trip, the first team to visit Friday is the Knicks, a team Sacramento coach Dave Joerger believes is on the rise.

“I think it’s an exciting time for them,” he said. “I’m not really excited about playing them twice in eight days but I think they look good.”

Knicks: Visit Miami on Tuesday night. The Knicks snapped an eight-game losing streak to the Heat with a 98-90 victory last Jan. 6 in their last trip to South Florida.

Check out the team sites for the Sacramento Kings and the New York Knicks for more game coverage.