Knicks’ Dolan rips fan in email, tells him to root for Nets 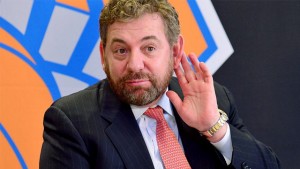 NEW YORK — Madison Square Garden chairman James Dolan responded to a Knicks fan who had criticized him with an email wondering if the man is an alcoholic and telling him to root for the Nets instead.

An MSG spokesman confirms the email, which appeared Sunday on Deadspin.com, was written by Dolan.

Dolan called the father of filmmaker Aaron Bierman a ”hateful mess,” adding that ”you most likely have made your family miserable. Alcoholic maybe” and urging him to try sobriety, saying he himself had been sober for 21 years.

The elder Bierman had written Dolan and said he was a Knicks since 1952 who was tired of Dolan’s management of the team and urging him to sell.

Dolan ended his response by saying to ”start rooting for the Nets because the Knicks (don’t) want you.”