Kevin Love marks his return to the playoffs with dominating performance 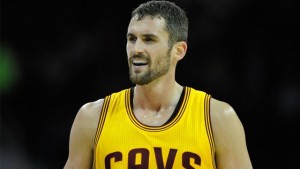 CLEVELAND — There were days last spring when you barely would have known Kevin Love was a member of the Cleveland Cavaliers if not for the billboard-sized posters of his likeness covering parts of Quicken Loans Arena for the Cavs’ playoff run.

After Love dislocated his shoulder in Cleveland’s closeout win in Boston in the first round a year ago, he retreated to virtual seclusion, in part by necessity but also by prerogative.

The Cavs reeled off eight wins in their first 10 playoff games without him (nine in 11 if you count Game 4 against the Celtics, when Love played only half a quarter before getting tangled up with Kelly Olynyk) while Love went about the business of getting better behind the scenes. He busied himself with trips to New York for shoulder surgery and follow-up examinations and stayed behind when his teammates went on the road as they made their march toward the NBA Finals.

It was a difficult period for Love. There were nights filled with the frustration of missing out on the postseason stage that eluded him for so long and the doubt that crept in about his true place on the team moving forward as Cleveland kept winning without him.

Love’s role in the Cavs’ 106-101 win over the Detroit Pistons on Sunday to open this season’s first round couldn’t have been any clearer. Some 10 months after his first trip to the postseason ended before it could really begin, Love gave himself a fresh start against Detroit, putting up 28 points and 13 rebounds.

“I think more than anything I looked at it as an opportunity,” Love said afterward, sharing the postgame podium with LeBron James and Kyrie Irving, who also had something to prove after missing the last five games of the NBA Finals with a fractured kneecap.

“Between Kyrie and myself, we’ve had many conversations about our playoff run being cut short,” he continued. “The way I look at it is an opportunity. I want to come out here, be really aggressive, have a next play type of mentality and just try to be one of the leaders out there and make an impact.”

His impact was never more apparent than it was in the fourth quarter Sunday. The Cavs, the heavy favorite in the series as the No. 1-seeded team in the East, fell down by seven points with 11:09 remaining to the No. 8-seeded Pistons.

Cavs coach Tyronn Lue called timeout. Rather than overhaul the lineup and pull Love from the game — which became a habit for his predecessor, David Blatt, in late-game situations — Lue not only kept him in, but played him at center for nearly the entire rest of quarter.

The radical decision to keep Love in at the 5 and run the offense through him with their play, “elbow wedge short,” that sets Love up for high-post touches, worked like a charm.

Not only was Love’s game activated, but Detroit’s All-Star center Andre Drummond was rendered ineffective as a rim protector because he was drawn away from the basket to try to defend Love.

“Kevin at the 5 is tough for them to try to defend,” Lue said. “That play, I think we manufactured probably 10 points in a row just running that play alone. It was a big play for us and putting Kevin at the 5 was a big adjustment for us.”

Not only did Love open up the offense for the Cavs as a whole, he got it going himself. With the score tied 88-88, he hit 3-pointers on consecutive possessions to finally give Cleveland momentum for good.

On a night that Irving led all scorers with 31 points and James was his normal brilliant self with 22 points and 11 assists, it was Love’s late 3-pointers that made the difference.

“He made big shots in crunch time,” James said. “Obviously one play that sticks in my mind is the loose ball that got kicked around. He was able to save it to [J.R. Smith] in the corner, Swish swung it to me and I drove and then found him back for that big 3.”

“My mentality was just to be aggressive all night,” Love explained. “I credit these guys, I credit guys on the bench, the coaching staff for keeping me locked in throughout and we have to do this for this entire series.”

Before the game, Pistons coach Stan Van Gundy was asked about the possibility of the series taking on a small-ball tone. “Us? We would try to stay away from it,” he said. “It’s not something that we would want to do. We would want to stay big as much as we can and try to play through it.”

Afterward, all Van Gundy could do was lament how Love hurt his team by allowing the Cavs to unleash the very small-ball look he was afraid of.

“He spreads floor out and it makes it tough in pick-and-rolls for your 5s to get out there,” he said. “We didn’t cover [Love] well, even when we do cover, then we’ve got our center away from basket. We’ve got the best rebounder in the game and we’re playing him 25 feet [from the basket].”

The game ended for Love with hugs from both Irving and James, followed by a postgame podium session together as a big three. There is no mistaking his importance, his belonging this time around.

Afterward, Iman Shumpert — one of Love’s teammates who would regularly FaceTime with him last spring to check on his shoulder and his spirits as the Cavs kept advancing — was asked what it was like to see Game 1 go the way it went for Love.

“We’re happy for him,” Shumpert said. “We know what he could have done for us last year during that playoff run. We missed him the whole time we were going through that run. And we’re more than excited to have him this year.”