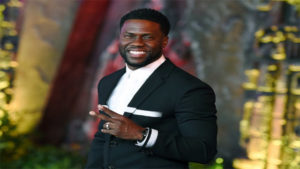 Following Kevin Hart’s “major” back injury in the crash of his vintage muscle car in the hills above Malibu early Sunday, his wife Eniko says the actor and comedian is going to be OK.

“He’s great. He’s going to be just fine,” she told TMZ on Monday outside the hospital, adding that Hart was “awake” but declining to answer further questions about his current state.

People and TMZ report that Hart is recovering after surgery for his back injury.

After the accident, Hart went to his home nearby to get medical attention before heading to Northridge Hospital Medical Center, according to a California Highway Patrol collision report obtained Sunday by USA TODAY.

According to the report, Hart, 40, was a passenger in his 1970 Plymouth Barracuda when it drove off Mulholland Highway and rolled down an embankment around 12:45 a.m. local time Sunday.

The report says Hart and the driver, Jared Black, 28, suffered back injuries. Another passenger, Rebecca Broxterman, 31, complained only of pain.

The CHP report says the car lost control as it turned from a canyon road onto the highway. Two of the car’s three occupants were trapped in the vehicle.

The report says the driver was not under the influence of alcohol. A representative for Hart didn’t immediately reply to messages.

Hart had featured the muscle car on Instagram last month, a gift to himself for his 40th birthday.

“I added some more muscle to the family for my 40th….welcome home ‘Menace’ ” he wrote in the caption.

The crash was first reported by TMZ.