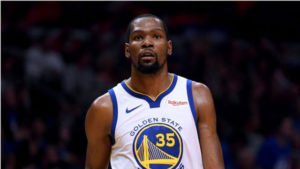 OAKLAND — We could be seeing more box-and-one defense from Toronto in Game 3.

Kevin Durant is “ramping up his workouts” to recover from a strained calf but will not play in Game 3 Wednesday night at Oracle Arena, Warriors coach Steve Kerr said Tuesday. Durant was not at practice at Oracle with his teammates, but that doesn’t mean he got the day off.

“Kevin is going to get on the floor at the practice facility later today…” Kerr said. “He was here for our film session and for some treatment, but he’ll be getting some work in this afternoon. He’s out for tomorrow, but improving.”

Klay Thompson was at practice, was walking without a limp, and got up a few standing-still shots, but was not actively participating in the part of practice the media got to view (or, likely, any of the rest of it). Thompson was optimistic he could play, while Kerr was more cautious and said his two guard was still questionable for Game 3. Thompson made it clear how he feels, but the Warriors don’t want him to aggravate the injury and make it worse in a series that looks like it could go six or seven games.

“It will be a game-time decision,” Thompson said. “But for me personally, it would be hard to see me not playing. Hopefully, I’ll feel much better tomorrow and be a go for tip-off.”

“He says he’s feeling well and that he’s feeling a lot better today than he did yesterday. And he thinks he’ll be ready to go…” Kerr said. “What we’ll have to determine is is that a risk? If he plays, are we risking anything? If the training staff feels good about his ability to go out there and play without making things worse, then he’ll play. But if there’s a risk, we would rather give him the next couple of days to continue to heal and hopefully have him out there for Game 4. But it’s literally day to day.”

Thompson injured his hamstring on an awkward fall after a jump shot where he tried to draw a foul during Game 2. Thompson, who had 25 points and was the best player on floor, left with 7:59 remaining in the fourth not to return.

“I was trying to brace for contact, which I probably shouldn’t have done, and I landed awkwardly,” Thompson said of the play where he got injured.

If the Warriors play without Durant and Thompson in Game 3, it will put a lot of pressure not only on Stephen Curry (who always has that pressure to create and be the focal point of the offense) but also on Draymond Green, Andre Iguodala, DeMarcus Cousins, and others to create looks and offense. The Raptors are too good to beat with just the Curry show, it will have to a more balanced effort.

Toronto will feel the pressure to win this game on the road before the Warriors get back to full strength.

If the Warriors drop Game 3, the pressure will mount to have at least one of Thompson and Durant — ideally both — to play in Game 4.

The Warriors also will be without Kevon Looney, who is out for the playoffs with a collar bone fracture.