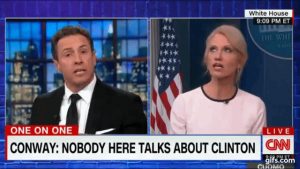 The two were engaged in a heated discussion about the Russia investigation when Conway mentioned Clinton and the 2016 election.

“So many people can’t get over the election results,” Conway said.

“Says my friend who can’t keep Hillary Clinton’s name out of her mouth,” Cuomo shot back.

That wasn’t the only eyebrow-raising moment of the interview. Conway gave Cuomo an epic eye-roll that harkened back to the one Anderson Cooper threw at her last year:

The two sparred about the First Amendment, specifically Trump saying he wanted to change libel laws:

CUOMO: For a man who says as many things that are as demonstrably false on a pace that we have never seen any president even approach, it is odd that he want’s to be in the fact-checking business.

They also shared an apples-and-bananas moment while talking about how drugs get across the border:

CUOMO: Putting up a wall isn’t going to stop illegal drugs coming into this country and you know that.

CONWAY: They come all different ways. Are you saying, I’m sorry Christopher, are you telling the viewers that no drugs come through the southern border? Did you just say that?

CUOMO: No, I’m saying the idea that a wall…

CONWAY: Facts first! Be an apple, don’t be a banana!

CUOMO: …the wall is going to be a difference is a joke.

They even argued about the interview itself:

CUOMO: You can’t just run through an explanation, trample the facts and then move on. You gotta give me a chance to get in here.

CONWAY: Whoa, whoa, whoa, don’t just do that just because it’ll make for a great viral moment or a promo, I see them in all your Cuomo promos.

CUOMO: There’s only one promo and you’re in it once but that’s OK.