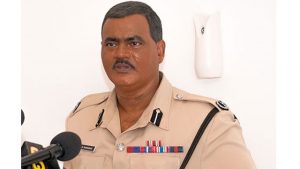 GEORGETOWN, Guyana, Wednesday October 26, 2016 – Guyana’s top cop doesn’t believe that bail should be granted to re-offenders or anyone who is charged with a gun crime.

Acting Commissioner of Police David Ramnarine is therefore calling for the judicial system to play a bigger role in helping police keep criminals off the country’s streets.

“One of the disturbing things when persons are charged with firearm offences is they are granted bail in the courts,” he said.

Providing an example, Ramnarine pointed to the cases of four men who were recently charged with unlawful arms and ammunition and were granted bail.

“Bail ought to be a serious deterrent to crime [but] in some cases persons are granted $200,000, $180,000, $50,000 bail. In one of the cases, a guy was charged for unlawful possession of arms and ammunition and he was granted bail. While on bail, he is arrested and charged with stealing an ATV valued over $3 million and he is granted bail again,” he said.

The police chief revealed that the same defendant was now a prime suspect in the robbery and murder of a Brazilian national in which a firearm was used.

Ramnarine described the judiciary’s constant decisions to grant bail to recidivists as “insensitive.”

“The amount of bail granted in the court makes a mockery of how a responsible authority behaves in these matters,” he said.

“I will not take responsibility for the behavior of other people who constitute and have a role to play in other elements in the criminal justice system.”