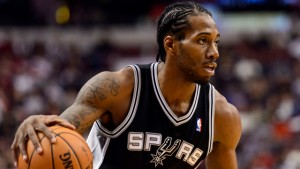 DENVER — After hitting a tough stretch in December, the San Antonio Spurs are regaining their winning form with a turnaround that has coincided with getting Kawhi Leonard and Tony Parker back from injuries.

Parker scored 18 points, Leonard had 17 points and 15 rebounds, and the Spurs won their fourth in a row by beating the Denver Nuggets 109-99 on Tuesday night.

“We were missing some players, still we didn’t like what we were seeing,” Manu Ginobili said of a three-week stretch in December in which the Spurs lost nine of 14 games. “We didn’t play well enough so we worked on it. Don’t believe we’ve fixed the issues, it’s a process. We’ve won four in a row but it doesn’t mean we’re good to go now.”

Tim Duncan added 16 points, all in the second half, to help the Spurs beat the Nuggets for the fifth straight time.

Leonard has been a big part of San Antonio’s recent surge, averaging 16.3 points in three games after missing the previous 15 because of a bruised right hand. Parker, too, is rounding into form after missing much of December with a hamstring strain.

“It’s coming back,” Parker said. “I’m still mad at myself because I missed some easy stuff (against the Nuggets). I just have to be patient. It’s only my seventh game back.”

Leonard said he feels like the Spurs are back on track.

“We all felt like we gave away some of those games in December,” Leonard said. “We just have to win out these next games, get into a rhythm going into the All-Star break.”

Denver got a big game from Kenneth Faried, with 26 points and 14 rebounds but it wasn’t enough to avoid their fourth straight loss, including their second in two nights. Golden State routed the Nuggets by 43 points Monday, Denver’s biggest loss of the season and the seventh biggest defeat in franchise history.

“We tried. We brung it, but the Spurs are a championship team and they’re on a hot streak right now,” Faried said. “They’ve been winning games. Their chemistry is starting to get back together, so it’s kind of tough, when you’re in a drought, and you play a team like that. They come out and kind of school you a little bit.”

Leading 66-65 in the third quarter, the Spurs used a 7-0 burst to extend their advantage to eight points before settling for an 80-76 lead heading to the fourth.

Leonard then hit two 3-pointers as part of an 11-2 run by the Spurs starting the final period, stretching their advantage to 91-78 with 9:18 left for their biggest lead to that point.

Denver pulled to 100-92 on successive layups by Wilson Chandler and Faried but Parker cut off the Nuggets’ momentum by connecting on a 3-pointer with 2:01 remaining. The Nuggets could not threaten the rest of the way.

San Antonio took its first lead of the game 29-27 on Cory Joseph’s jumper with 9:03 remaining in the second quarter. The Spurs led 51-48 at halftime, getting five points from Manu Ginobili in the last 1:25 of the period.

TIP-INS
Spurs: Assigned Kyle Anderson to the Austin Spurs of the NBA Developmental League. … Marco Belinelli, out with a strained left groin, did not make the trip. … Leonard’s 15 rebounds represented a season high.

Nuggets: Sent Erick Green to Fort Wayne of the NBA Developmental League. … Danilo Gallinari missed a 15th game because of a torn meniscus in his right knee. … Arron Afflalo has scored at least two 3-pointers in 20 of 42 games this season. … Denver has been swept in its last three back to back sets.