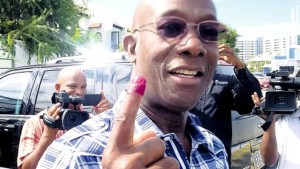 The preliminary figures showed that the PNM won 22 of the 41 seats with the remaining 19 going to the PP that had won 29 seats in the 2010 General Election.

The 66-year-old volcanologist, one of the longest-serving legislators, said the election proceedings “have gone down relatively smooth.

“Election day had some challenges, but at the end of the day, once again, I think we had a very successful operation. And I am pleased to be in a position to say that the PNM has won the majority of the seats.

“We are confident that the country has been placed in good hands. We have prepared ourselves well, we expect that we will take the responsibilities of managing the affairs of all the people of Trinidad and Tobago in a way that will allow us all as a people to look at tonight …as the beginning of a new era,” said the prime minister-elect.

Both Persad-Bissessar and Rowley easily retained the seats they had in Parliament over the past two decades.

Prime Minister Persad-Bissessar had not conceded defeat up to late last night, but a number of government ministers, including Roger Samuels, Lincoln Douglas, Attorney General Garvin Nicholas, as well as the former president of the Senate Raziah Ahmed, were among the casualties of the poll.

Leader of the Independent Liberal Party (ILP) Austin Jack Warner, who said his party would have been a major factor in determining the new Government, failed to win the Chaguanas East seat he switched to after successfully contesting the Chaguanas West seat in 2010 and 2013.

“I said win, lose or draw it would be my last hurrah, “Warner said, telling reporters “it is a PNM victory and one for ILP”.

Warner said his “greatest success” had been the failure of Persad Bissessar to win the election, adding “Kamla will never see Government again in our collective lives”.

PNM supporters last night took to the streets in celebration, and Rowley said, “we have taken the responsibility of offering ourselves, and now we will proceed with what we outlined in our manifesto, given the circumstances that have developed, bearing in mind all the time that we do not govern for ourselves but we are servants of the people of Trinidad and Tobago.”