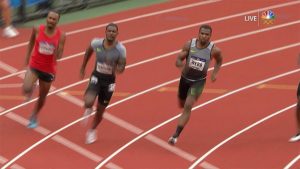 Ameer Webb accomplished a feat that no sprinter besides Usain Bolt has accomplished since 2013—defeating Justin Gatlin. Webb clocked 20.27 seconds, edging Gatlin by .05 seconds in their first-round 200m heat at the U.S. Track and Field Trials on Thursday. Both will advance to the semifinals, which are scheduled for Friday at 8:37 p.m. ET.

It was Gatlin’s first individual loss since finishing second to Bolt in both the 100m and 200m at the 2015 World Championships. Gatlin had not lost a race to a sprinter other than Bolt since Sept. 6, 2013, when he finished fourth behind Bolt, Mike Rodgers and Nesta Carter in a 100m Diamond League race in Brussels.

The men’s 200m final is Saturday at 8:42 p.m. ET. The three fastest sprinters will qualify to go to Rio.