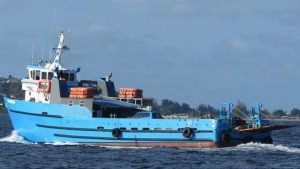 A Notice issued by the St Christopher Air and Sea Ports Authority (SCASPA) to the operators of the MV Sea Hustler to “discontinue all loading and unloading (handling) of commercial cargo at the Basseterre Ferry Terminal as of February 6, 2017 has been declared ultra vires (an invalid excess of authority or power).

His Lordship, Mr Justice Eddy Ventose quashed the Notice to Wesk Limited, owner and operator of the Sea Hustler and ruled it “was made in breach of the principles of natural justice,” “was irrational and unreasonable” and “was not proportionate to the objective of protecting public safety.”
Justice Ventose was of the view that the section used to give Notice to the Sea Hustler does not give the SCASPA the authority to do so.
The court found too that SCASPA did not afford Wesk Limited a fair hearing when the Notice was issued and was in breach of Wesk Limited’s right to natural justice.
In the absence of a contract between SCASPA and Wesk Limited and the facts, Justice Ventose ruled the company was not entitled to the EC$193,893, 51 it sought in damages.
He made no order to costs in the January 15, 2019 ruling.
Dr Henry Browne QC with him, Mr Victor Elliott-Hamilton appeared for Wesk Limited. Mr Fitzroy Eddy represented SCASPA.