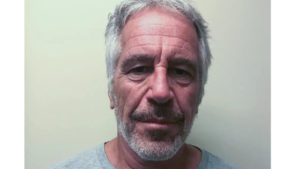 One-time friend of Donald Trump and Prince Andrew will be placed on suicide watch while he awaits trial on child sex trafficking charges.

Billionaire paedophile Jeffrey Epstein, who is facing child sex trafficking charges involving dozens of girls, has been placed on prison suicide watch after being found unconscious in his cell with marks around his neck, US media reported, quoting unidentified sources..

The financier and one-time friend of both Donald Trump and Bill Clinton was discovered by guards sprawled on his floor and blue in the face on Wednesday, reports said.

He was rushed from New York’s Metropolitan Correctional Center, where he is being held, to a local hospital.

Although speculation was rife, officials did not confirm how the 66-year-old got his injuries or what his condition was by Thursday.

Another inmate Nicholas Tartaglione – a former police officer charged with four counts of murder – was questioned over the incident but denied knowing what happened, NBC reported.

Epstein – who is already a registered sex offender after being found guilty of soliciting a minor for prostitution in 2008 – looks set to remain behind bars until his new trial.

A judge denied him bail on 18 July after he was deemed a flight risk.

District Judge Richard Berman made the ruling after investigators found Epstein – a one-time associate of Prince Andrew – had $70,000 (£56,000) in cash, as well as 48 diamonds, stowed away at his $77m mansion on Manhattan’s Upper East Side.

They said they also found a foreign passport with a photograph of Epstein but which was registered under a different name.

“Nude photographs of what appeared to be underage girls” were further uncovered, the court was told.

The new charges laid against Epstein concern trafficking allegations involving dozens of minors from 2002 to 2005 allegedly carried out in Florida and New York.

Epstein’s lawyers say they should be wiped as the new legal action backtracks on a plea agreement which saw him admit his 2008 charge in return for immunity from future allegations.