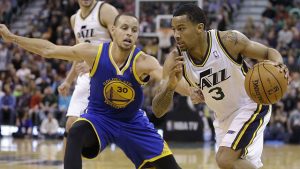 Outside of giving Kevin Durant some additional time on the court, Golden State coach Steve Kerr thought it was more important to rest his starters in the fourth quarter than try to extend the longest winning streak in the NBA this season.

With the playoffs starting this weekend, it was an easy decision.

“A win is a win,” Gobert said. “They didn’t put their starters back in at the end but we were still in the game. We know the playoffs are going to be a different atmosphere but it’s still a great win.”

Kerr, his team already assured of the No. 1 seed in the playoffs, sat most of his starters for the entire fourth quarter and the Jazz (50-31) took advantage to end a seven-game losing streak at Oracle Arena.

“We didn’t have any injuries so that’s all good,” Kerr said. “They got 12 more field goal attempts than us. That was the difference in the game.”

Stephen Curry had 28 points in three quarters for the Warriors (66-15), while Durant added 16 points, 10 rebounds and six assists in his second game back following a knee injury.

With nothing at stake for the Warriors, the Jazz rode Gobert’s seven-point fourth quarter to their first win at Oracle Arena since April 7, 2013.

Gobert’s follow shot gave Utah an 83-82 lead with 7 minutes left. He later scored on an alley-oop dunk off a pass from Boris Diaw, then blocked a shot by Patrick McCaw to preserve the Jazz’s lead.

Utah won despite being without Gordon Hayward, Derrick Favors, Rodney Hood and Raul Neto, all of whom have been nursing nagging injuries.

Golden State was also short-handed, as Kerr rested Klay Thompson. He was joined on the bench in the fourth by most of the rest of the starters. Durant and Zaza Pachulia were the lone exceptions and Durant joined his teammates on the bench early in the final quarter.

That opened the door for Utah and the Jazz closed strong down the stretch.

George Hill had 20 points and Johnson finished with 19, including five 3s.

Warriors: Draymond Green picked up his 14th technical foul of the season in the third quarter. … Matt Barnes (sprained right ankle) did not play and will sit out the season finale as well. “Hopefully we’ll get him back during the first round,” Kerr said.

Durant, who missed more than a month while injured, showed no lingering effects. He brought the Oracle Arena crowd to its feet with a soaring one-handed dunk late in the third quarter and drove baseline for another one-handed stuff. “Felt really good, I can’t lie,” Durant said. “Overall I felt good on the defensive end . got a few dunks. I guess that’s the last piece of the puzzle.”

The Warriors’ hopes of tying the 1984-85 Lakers for most games with 30 or more assists ended when Golden State was held to 25. Kerr’s club still has 50, two shy of the NBA record.

The Warriors flew in a new ballboy for the game — 7-year-old Brody Stephens from Indiana. Stephens, who suffers from leukemia, attended the team’s shootaround earlier in the day as well as Kerr’s pregame press conference as guests. Stephens first met the Warriors when he was visited in the hospital by Curry last November when Golden State was in Indiana to play the Pacers.

Jazz: Host the Spurs on Wednesday. Utah has lost two of the three meetings this season.

Warriors: Face the Los Angeles Lakers in the regular-season finale at Oracle Arena on Wednesday. Golden State has won eight straight home games versus the Lakers.

Check out the team sites for the Utah Jazz and the Golden State Warriors for more game coverage.