James passes Jordan, Cavs back in Finals with 135-102 win 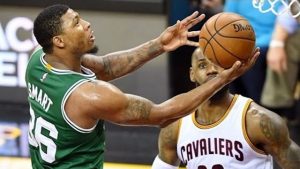 BOSTON — The NBA Finals has its first “three-match,” courtesy of a King who passed His Airness.

LeBron James scored 35 points and passed Michael Jordan to become the NBA’s all-time playoff scoring leader as the Cleveland Cavaliers beat the Boston Celtics 135-102 on Thursday night to claim their third straight Eastern Conference title and another trip to the NBA Finals to meet the Golden State Warriors.

Kyrie Irving added 24 points and Kevin Love finished with 15 for the Cavs, who never trailed and led by as many as 39 points in one of their most dominating wins of the series. The Cavs set an NBA record by winning their 13th consecutive series closeout opportunity.

Cleveland’s 4-1 series win gives it a 12-1 record this postseason and sets up a third consecutive matchup with Western Conference champion Golden State, the team it beat in the Finals last season to claim the franchise’s first championship.

“I wear the number because of Mike,” James said. “I think I fell in love with the game because of Mike, just because of what he was able to accomplish. When you’re watching Michael Jordan it’s almost like a god. So I didn’t think I could be Mike.”

It will mark the seventh straight trip to the Finals for James, who hit a 3-pointer late in in the third quarter to nudge past Jordan on the playoff scoring list. He quickly flashed one finger as he backpedaled down the court.

In the postgame trophy presentation backstage, James spent most of it lingering in the background as his teammates celebrated.

But there’s no denying that his accolades are putting him in the orbit of Jordan, his boyhood idol.

As much as this series was about James, Irving helped turn the tide of the series with a 42-point effort in Game 4. But he said both he and his teammates continue to be inspired by their leader.

“He’s been the driving force, this entire playoff run, and all of us have just helped us along the way,” Irving said.

“This team is a crazy team. They just stayed resilient all year, got to the playoffs, and we really stepped our game up,” he said. “Now we can start focusing on Golden State to get ready. As of tonight, I’ll get started.”

The Cavaliers basically conceded the East’s top seed to the Celtics at the end of the regular season by opting to rest their starters in advance of the playoffs. But they displayed their superiority over the final two games to wrap up the series.

After allowing the Celtics to seize the early momentum in Game 4, the Cavs barely gave them the chance in Game 5.

Led by its Big Three, Cleveland quickly built a 21-point lead in the first quarter, while getting lots of contributions from their teammates.

Love continued to knock down shots from the outside, Irving sliced his way into the lane to the rim and James got free for several of his one-handed, tomahawk dunks.

It was a very welcomed sight in Irving’s case, after he rolled his left ankle in the third quarter of Cleveland’s Game 4 win. He showed no signs of lingering issues, though, beating several defenders off the dribble and handing out seven assists.

Deron Williams, who had been quiet for most of the series, also got in on the act with a series-best 14 points for Cleveland.

Cavaliers: James has scored 30 or more points in 11 of Cleveland’s 13 games this postseason. … Improved to 36-5 against Eastern Conference opponents in the playoffs since 2015. … The 43 points Cleveland scored in the first quarter set a team postseason record for a quarter.

Celtics: Never led at home in the series. … Finished the playoffs having made at least 10 3-pointers in 16 of their 18 games. … Held a pregame moment of silence for the victims of the Manchester bombing.

The Celtics did their best to keep up, but the consistent outside shooting, bench scoring and defense they relied on to stun Cleveland in Game 3 wasn’t there Thursday night.

Celtics coach Brad Stevens said though he’s disappointed with how the season ended, he’s encouraged that no one in Boston’s locker room is satisfied just making it to the conference finals.

“I told our guys: `We made a lot of great strides, but this pain is part of the path to what we ultimately want to be,” he said.

Injured Celtics point guard Isaiah Thomas was in attendance Thursday night and gathered with his teammates in a huddle before they took the court for pregame warmups.

The two-time All-Star was sidelined in Game 2 after aggravating a hip injury.

Check out the team sites for the Cleveland Cavaliers and the Boston Celtics for more game coverage.