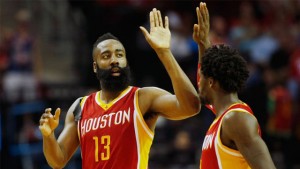 The Rockets’ James Harden (left) celebrates with Patrick Beverley after hitting a 3-point shot against the Nuggets.

HOUSTON — Even the biggest stars of the Houston Rockets’ past couldn’t outshine James Harden on Thursday night.

Harden scored a career-high 50 points with 10 rebounds to lead the Rockets to a 118-108 win over the Denver Nuggets on a night when the team celebrated the 20th anniversary of the franchise’s back-to-back NBA titles in 1994 and 1995.

Harden got a boost by knowing players such as Hakeem Olajuwon and Clyde Drexler were watching from the front row.

“That’s a special group right there,” Harden said. “We’re trying to build something special like they did (and) to play a game in front of them was definitely an honor.”

It was the ninth time a Rocket has reached 50 points and the first time since Olajuwon had 51 against the Celtics on Jan. 18, 1996.

Harden eclipsed his previous career-best of 46, set in 2013, on a free throw with about a minute remaining. On Houston’s next possession, Trevor Ariza found him in the corner and he swished a 3 under heavy pressure, to make it 50.

“It just looked so easy,” Ariza said. “It was like he just woke up and walked out there and had 50. That’s how easily he scored the basketball.”

Harden broke into a huge smile when asked about the 3-pointer that capped his big night.

“Many, my teammates are amazing,” he said. “Trevor noticed what was going … dribbled right at me, I just said: `I’m going to let it fly’ and it went in.”

Six straight points by the Nuggets cut the lead to 8 with about five minutes left when the Rockets made the next five points, capped by a step back jump shot from Harden, to make it 104-91. Harden scored seven points after that to secure the victory.

It was the 29th game with at least 30 points and seventh with 40 this season for Harden, who is second in NBA scoring. He bounced back from a tough shooting game on Tuesday, when he had 17 points, by scoring 22 before halftime on Thursday night.

“It’s really hard to get 50 points in a game and is not something many people can do,” coach Kevin McHale said. “I was just one of those nights where he had good energy and he was driving hard.”

Houston made 32 free throws in this game, led by 22 by Harden, which were the most made by a player in the NBA this season.

Wilson Chandler and Randy Foye scored 23 points each for the Nuggets, who dropped to 0-4 against Houston this season.

“Obviously he’s probably the MVP this year in the NBA,” Foye said of Harden. “He did an unbelievable job of creating and also getting to the free throw line.”

Houston’s star came in and helped the Rockets go on a 7-1 run to extend the lead to 99-85 midway through the quarter.

The Rockets already had a big lead in the third quarter when they scored seven straight points, with five from Harden, to make it 76-58 midway through the quarter.

Harden scored six of the points in a 9-1 run the Rockets used to close out the quarter and make it 90-73 entering the fourth.

Harden made each of his eight free throws in his 16-point third quarter.

Rockets: F Terrence Jones injured his rib in the first quarter and didn’t return. … C Dwight Howard remains out with swelling in his right knee, but said on Wednesday that he’s `pretty close’ to returning. Howard hasn’t played since Jan. 23, but has returned to practice in the last week. … G Jason Terry sat out with a sore left hamstring.

The reunion of the back-to-back championship teams Thursday included a luncheon and halftime ceremony. Along with Drexler and Olajuwon, among the others in attendance were Robert Horry, Vernon Maxwell, Mario Elie and coach Rudy Tomjanovich. NBA commissioner Adam Silver was in town for the event and opened the halftime ceremony by calling these teams “two of the greatest teams ever assembled in the history of the NBA.”