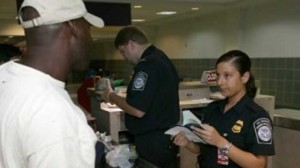 News Americas, PHILADELPHIA, PA, Tues. Dec. 23, 2014: A 42-year-old Jamaican national will spend the next eight months in prison followed by three years of supervised release for obtaining a U.S. passport through fraudulent statements.

Wayne Christopher Morgan was sentenced Friday some six months after he was arrested at the Philadelphia International Airport (PHL). On June 5th, Morgan had arrived in Philadelphia on the evening of June 5 from Montego Bay, Jamaica and presented a U.S. passport in the name of a U.S. citizen from Florida to a U.S. Customs and Border Protection (CBP) officer.

The CBP officer referred him to a comprehensive secondary inspection where a biometric examination revealed a Department of State record on Morgan, a Jamaican citizen who was denied a U.S. visitor’s Visa in 2007.

The U.S. Attorney’s Office for the Eastern District of Pennsylvania prosecuted Morgan, who presented a guilty plea on September 23.

“Violating U.S. immigration law is a very serious offense and U.S. Customs and Border Protection hopes this conviction sends a strong message to deter others wishing to violate our nation’s immigration laws. This case also illustrates the tremendous collaboration between our respective law enforcement agencies to end this impostor’s charade,” said Susan Stranieri, CBP Port Director for the Area Port of Philadelphia.

“This criminal’s sentence is a lesson to anyone who tries to unlawfully enter our country,” said John Kelleghan, special agent in charge of Homeland Security Investigations Philadelphia. “We will continue to work with CBP and other partners to safeguard our nation’s access.”

Morgan will be deported back to Jamaica after serving his time.