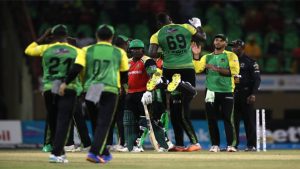 The Jamaica Tallawahs will contest the Hero Caribbean Premier League (CPL) final after a 37-run victory over the Guyana Amazon Warriors in Qualifier 2.

The Amazon Warriors won the toss and opted to field first and that seemed to be an excellent decision after they reduced the Tallawahs to 37/2 in the PowerPlay.

However, Shamarh Brooks produced one of the all-time great Hero CPL innings to guide the Tallawahs to a season-high 226/4. His unbeaten 109 came off 52 balls and along with Imad Wasim the pair plundered 103 runs from the final five overs to take the game away from the Amazon Warriors.

Although Keemo Paul produced a good inning of 54 from 37 balls no one else was able to stay with him to pull off an unlikely heist.

Earlier the Amazon Warriors had seemed to be in control of the game when Raymon Reifer was dismissed for 22 to leave the Tallawahs 123/4 with five overs to go. However, Brooks and Wasim launched an unbelievable assault at the back end.

Brooks hit a maiden T20 century whilst Wasim made an unbeaten 41 off 15 balls to all but secure the Tallawahs a place in the Hero CPL final.

If the Amazon Warriors were to chase the 227 to win, they needed a lightning start in the PowerPlay and they got that by putting up 62 runs. However, they lost three wickets in the process thereby handing the Tallawahs an advantage going forward.

Wickets continued to fall at regular intervals as the Tallawahs bowlers put the squeeze on the Amazon Warriors. Imad Wasim was the star turn leading the bowling unit with 2/25 in the absence of Amir.