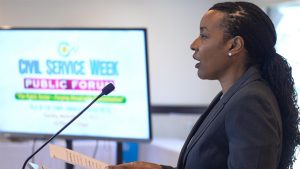 The proposed introduction of paternity leave in Jamaica for fathers of newborns and family leave for adoptive parents bringing a new child into the home, is slated to come into effect on January 1, 2023.

This was stated by Minister of State in the Ministry of Finance and the Public Service, Marsha Smith, who also advised that the proposed increase of paid maternity leave from 40 days to three months will commence on January 1.

She was speaking at the Civil Service Week Public Forum at The Jamaica Pegasus hotel on November 22. The forum was held under the theme ‘The Public Sector: Forging Ahead with Determination’.

The changes are coming out of the current public-sector compensation review and will be facilitated by updating the Public Sector Staff Orders of 2004.

The compensation review is intended to overhaul the structure of salaries and other emoluments in the public service.

“This is an opportunity for other Jamaicans who have the capacity and the ability to take on fostering to foster a child. If you are a public servant, you are going to be given that opportunity to get those weeks to settle that child in before you go back to work fully. This is why we are trying to modernise the public sector in real ways to meet the ways of public servants, not just in terms of compensation but also in overall quality of life,” she said.

Smith said the aim is to ensure that public servants are compensated in ways that are competitive with the local private as well as the international markets.

“These changes will ensure that we are able to retain the talent locally, which will ensure an efficient, simplified public sector,” she said.

Meanwhile, she indicated that the Ministry of Finance and the Public Service has reached an agreement with several trade unions representing public-sector workers on the restructured public-sector compensation system.

“I was very happy last week when the Ministry of Finance, together with its union partners… were able to sign several memoranda of understanding, and these… cover approximately 60,000 employees, and we are well under way to seeing the entire public sector being transformed,” Smith noted.

“The minister of finance… is committed to ensuring that we implement a public-sector compensation that is fair, transparent and sustainable. He is determined to ensure that each and every public sector worker is better off financially. To all public-sector workers, I say be patient; there is always some shifting around when there is transformation, but in the end, everything eventually settles down,” she said.

Smith applauded all the unions that have passionately represented their members through the process, “and I acknowledge the trust they have shown in the Government by signing this agreement”.

“For those who have not yet signed, I encourage you to do so. I am confident that this is a step in the right direction as we continue to change the various aspects of public-sector transformation,” she said.