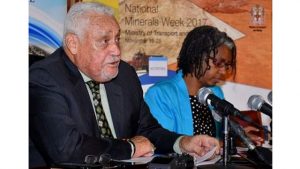 THE Government, through the new National Minerals Policy (NMP), is positioning the country to tap into potential opportunities from the billion-dollar global minerals industry.

“The sector has a current value of just over US$1 billion, and under the new minerals policy every effort will be made to integrate it into the wider society, so that the ripple effect will trickle down to the community level,” said Minister of Transport and Mining Michael Henry.

He was speaking at the National Minerals Week Investment Forum at the Terra Nova All-Suite Hotel in St Andrew on Tuesday.

Minister Henry said Cabinet is to receive a submission shortly on the first draft of the NMP, which provides for the management and development of Jamaica’s mineral resources.

It places emphasis on partnership between the public and the private sectors, and outlines the possible benefits of the structured development of the minerals sector to the Jamaican people, as well as the mix of policy measures, objectives and strategies to be pursued in order to realise the sector’s continued transformation and optimal development.

Henry said the time has come for players in the sector to organise their operations to maximise returns and go for the growth that beckons.

He argued that there is no way “we can improve this sector without taking steps to diversify it and take advantage of the value-added components that have seemingly eluded us over the years”.

Meanwhile, he said efforts will be redoubled to ensure the sustainability of the sector, adding that more emphasis will be placed on the environment and the people.

As such, he said, operations will be more stringently policed and operators will have to adhere to the regulations that govern the sector.

Henry also mentioned plans for the establishment of a National Minerals Institute for the training and development of human resources for the sector.