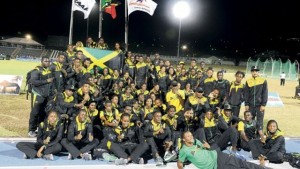 Members of Jamaica’s Carifta Games squad at the end of the 44th edition inside the Kim Collins Stadium in Basseterre, St Kitts

Jamaica’s junior athletes once again proved they are the kings and queens of the Caribbean with another dominant display at the annual Carifta Games after amassing 85 medals at the 44th staging of the championships which ended at the newly renamed Kim Collins Stadium in Basseterre, St Kitts, yesterday.

The Jamaicans won 41 gold, 25 silver and 19 bronze medals, the 31st straight time they have topped the table and their second best ever haul since the schedule moved to 66 events, and just shy of the record 89 medals won last year in Fort de France, Martinique.

The Bahamas finished second on the table with 31 medals, eight gold, 13 silver and 10 bronze; Barbados were next with seven gold, four silver and five bronze; Trinidad and Tobago were fourth with six gold medals, eight silver and eight bronze, while Grenada won a gold, three silver, and four bronze to complete the top five.

From Friday’s opening session, the Jamaicans took charge and never let go, increasing their dominance with every passing session.

Yesterday, Youth Olympics champion Jaheel Hyde completed his second hurdles double after winning the Under-20 110m hurdles gold medal in a wind-aided 13.36 seconds (3.3m/s) to add to the gold medal he won in the 400m hurdles a day earlier.

Xavier Coakley of The Bahamas was second in 13.51 seconds, just ahead of Seanie Selvin, who took the bronze for Jamaica in 13.57 seconds.

Trinidad’s Kayelle Clarke won the Under-20 race in 23.12 seconds (4.3m/s) beating Jamaica’s Saqukine Cameron with 23.32 seconds and Keianna Albury of The Bahamas in 23.49 seconds.

Five runners started the boys’ Under-20 200m race, as both Jamaican representatives Chad Walker and Nigel Ellis and Tyler Bowe of The Bahamas did not show up. Only four finished, however, as Trinidad’s Jonathon Farinha pulled up midway the race.

Lisa Buchanan took the silver in the Under-20 girls’ 800m, as The Bahamas’s Shaquania Dorsett won her second gold in 2 minutes, 11.99 seconds after winning the 400m.

Jamaica’s Chrissani May won the silver in 2:13.28 minutes and St Kitts/Nevis’ Reandra Richards was third with 2:14.48 minutes.

Leon Clarke and Jauvaney James were first and second in the Under-18 800m, while Barbados’s Jonathon Jones took the bronze.

Isheeka Binns set a new record in the Under-20 girls’ javelin with a new mark of 49.72m, beating the 47.88m set last year by Martinique’s Sephora Bissoly.

Ayesha Champagnie, also of Jamaica, took the silver with 47.51m, and the bronze went to Granada’s Candesha Scott, who threw 45.58m.

Obrien Wasome took his second silver medal and defending champions Odaine Lewis was third in the Under-20 boys’ triple jump.

Shanice Love won the Under-20 girls’ discus with 49.39m with teammate Rochelle Frazer second with 46.86m and Martinique’s Emeline Tedos taking the bronze with 41.00m.