It’s Happening: Rihanna Confirms ‘R9’ Will Be A Reggae Album 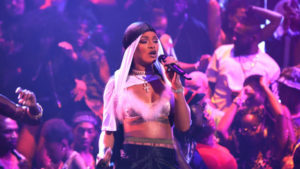 Last year, sources close to singer and business mogul Rihanna told Rolling Stone that her ninth studio-album would pay homage to her Caribbean roots. In an interview with T Magazine, the news appears to have been confirmed by the Bajan beauty herself.

Rihanna hinted that the project– which she joked may actually be called R9 thanks to her Navy– will indeed be a Reggae/Dancehall album.

“I’m about to call it that probably, ’cause they have haunted me with this ‘R9, R9, when is R9 coming out?’” she laughed. “How will I accept another name after that’s been burned into my skull?” Elsewhere in the conversation about new music, Rihanna stated that Drake will not be a featured artist on the LP and that she is open to working with Lady Gaga in the future.

Last year, an anonymous producer stated that Rih’s team had “500 records” for R9 “[From] different producers and writers.” Despite the massive number of tracks to choose from, they were able to narrow it down to the lowest double-digit.

“They’re only choosing 10 records,” the producer reportedly said. “They’ve been having writing camps and trying to keep them quiet for almost a year and a half now.”

While there’s no official word on when her highly-anticipated follow up to ANTI will drop, Rihanna is certainly keeping busy. She recently announced she is working with LVMH on an exclusive fashion house, Fenty, expanding her brand as a beauty and fashion entrepreneur.