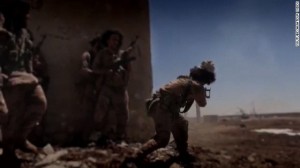 There are plenty of slow-motion explosions, and flames are shown engulfing American troops.

There are cameos from President George W. Bush and his “Mission Accomplished” banner, along with plenty of menacing fighters with masks over their faces, ready to execute civilians.

The producers even toss in a clip from Obama at the White House: “American combat troops will not be returning to fight in Iraq,” he says.

A lingering explosion puts an exclamation point on the whole thing.

And then the logo, fit for a Hollywood blockbuster: “Flames of War — fighting has just begun … Coming soon.”

The video fades to black.

Named after a town in northern Syria, Dabiq magazine publishes stories portending a battle between Islam and the West. It has portrayed Obama and Republican Sen. John McCain of Arizona as “crusaders” who will “bring about the complete collapse of the modern American empire.”

It also carries images evoking apocalyptic battles between the Sunni extremist group’s fighters and the rest of the world, including American soldiers enveloped in flames.

ISIS is taking a page from the playbook of al Qaeda, a former ally that has praised and advocated terrorist attacks in its glossy magazine, Inspire.

But experts say the terrorist groups don’t appear have the same propaganda goals.

Inspire focuses more on practical advice for terrorists planning attacks, publishing guides on how to make bombs and get them onto planes.

Dabiq is a vehicle intended to spark desire in its readers to join and fight with ISIS, said Seth Jones, a security analyst at the RAND Corporation.

The Kurdish fighting force known as the Peshmerga killed an ISIS commander during battle Tuesday, according to a senior Peshmerga official who took part in the operation.

The Peshmerga killed ISIS commander Abu Abdullah during a Kurdish operation to push ISIS farther from Irbil, the capital of Iraq’s Kurdish region, the official said on condition of anonymity Wednesday.

In the battle, the Peshmerga reclaimed five Iraqi villages as well as a bridge along the main highway linking Irbil to Mosul, Iraq’s second-largest city, according to a senior Peshmerga official taking part in the operations.

The Peshmerga said the battle was meant to push ISIS fighters back toward Mosul, to the west of Irbil — and part of the Peshmerga’s larger plan to reclaim areas that ISIS claimed this year.

ISIS destroyed the bridge linking the two cities a month ago, hoping to prevent any opposing force from advancing on Mosul, but the Peshmerga said its forces went around the bridge for Tuesday’s attack.

U.S. air power appeared to play a role in the offensive. Two U.S. airstrikes targeted an armored vehicle and ISIS fighting position northwest of Irbil, according to the U.S. military. That’s the same area where the Peshmerga operation was under way.

ISIS has seized large swaths of land as part of its effort to create a caliphate — an Islamic state — that stretches from western Syria to eastern Iraq.