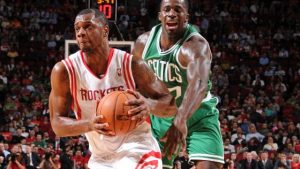 Smart drew an offensive foul on James Harden with 7.3 seconds left, getting the ball back in time for Al Horford to sink a hook shot with 3.7 seconds left, and the Celtics rallied from a 26-point deficit to beat Houston 99-98 on Thursday night.

“It just shows the value of Marcus Smart to our group and what he does for our team. It all started with him in the second half,” Horford said. “It was just a domino effect. That’s how special he is. And when he plays at that level we’re just a different team.”

After Horford’s shot, Smart did it again when he drew another foul on Harden and the Rockets ran out of time.

Kyrie Irving scored 26 and Jayson Tatum finished with 19 for the Celtics, who held Houston to just nine field goals in the second half while tying the largest comeback in the NBA this season.

“I’ve had a few comebacks, but this is a special one. From just how we started, it was just so ugly,” Irving said. “They came out firing. We just had to battle back. It took a lot. It took everybody.”

Smart and Terry Rozier had 13 points apiece and Horford finished with nine points and eight rebounds.

Tatum made a layup with seven seconds left to pull the Celtics within 98-97, then Smart had position on Harden for an offensive foul that gave Boston the ball. Horford converted from the lane to put Boston up for the first time in a game Houston had led throughout and dominated until midway through the third quarter.

Harden finished with 34 points and 10 assists. Eric Gordon scored 24 points for Houston, which shot 25 percent in the second half and lost its fourth straight.

“It was the tale of two halves,” Houston coach Mike D’Antoni said. “We were kind of like them in the first half and they were like us in the second.”

The Rockets had one last chance after Horford’s go-ahead hook shot, but Harden was called for another offensive foul and time expired after Horford missed his second free throw.

Houston opened the game on a 12-0 run and led 62-38 at halftime. After committing six turnovers in the first half, Houston had seven in the third quarter and Boston capitalized by outscoring the Rockets 31-16. Irving scored 12 in the third quarter as Boston picked up its defense, holding Houston to just four field goals in the period.

Boston got within a point a couple times in the fourth, but couldn’t quite catch the Rockets until the final seconds.

After Smart drove for a layup and pulled Boston within 96-95 with 13.5 seconds left, Harden drew a foul and made both free throws to put the lead back at three. Rather than going for the 3-pointer, Boston went to Tatum for another layup, then Smart took an offensive foul by Harden on the inbounds play.

“You know they were going to deny the ball and we knew that,” Gordon said. “We always have all the guards try to go after the ball, but it’s just tough to play basketball toward the end of the game like that when things are going the other way.”

Houston’s lead was in the 20s for nearly all of the second quarter and much of the third before Boston pulled back within range on a 12-0 run.

Rockets: Veteran swingman Gerald Green, who signed a free-agent deal with the Rockets earlier Thursday, finished with two rebounds and no points in 11 minutes. … The Rockets’ 62 points in the first half were the most scored on the Celtics in the first two periods of a game this season. … Houston point guard Chris Paul missed his third straight game with a groin strain and the Rockets fell to 10-7 without him. … The Rockets were also without center Clint Capela, who has a right orbital fracture.

Referee Mark Lindsay missed the game with a sore back, leaving Tony Brothers and Gediminas Petraitis to officiate the game on their own.

There were plenty of disputed calls throughout, including one that got Boston coach Brad Stevens and Marcus Morris technicals with 1:56 left in the third.

Harden was the most vocal about the officials being down a man for the entire game.

“You can’t have two officials in a professional game,” Harden said. “There was a lot of no-calls that needed to be called because it changed the dynamic of the game. You got fast-break points, no calls, turnovers or whatever the case may be. This is a professional game on national TV. It can’t happen.”

Rockets: Wrap up a three-game road trip Friday at Washington.

Check out the team sites for the Houston Rockets and the Boston Celtics for more game coverage.