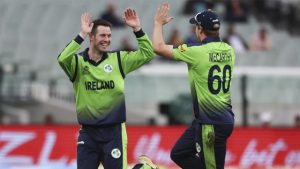 The relentless rain in Melbourne later saw the New Zealand vs. Afghanistan game abandoned without a ball being bowled.

Ireland was sent in to bat and posted 157 in 19.2 overs with skipper Andy Balbirnie belting 62 from 47 balls and Lorcan Tucker scoring 34.

It’s yet another upset in a tournament that has already seen the two-time champion West Indies fail to qualify for the second round after preliminary-stage losses to Scotland and Ireland. Former champion Sri Lanka lost its first-round opener to Namibia before recovering to advance to the Super 12s.

“We were poor in the first 10 overs and let Ireland get away. We let them score freely on both sides and were not consistent (bowling),” England captain Jos Buttler said. “We won the toss and bowled first, knowing what we needed to do. We didn’t take advantage of it.”

The start at the MCG was delayed by 15 minutes before another 25-minute delay after only 1.3 overs were bowled.

Put in to bat, Ireland had made a good start and reached 59-1 in the powerplay. Opener Bilbirnie put on an attacking display and added 82 runs off 57 balls with Tucker for the second wicket. Bilbirnie hit five fours and two sixes.

Ireland was 92-1 at the end of 10 overs and it gave the team vital impetus in the match.

Bilbirnie reached his half-century off 40 balls as Ireland lost regular wickets at the other end. Tucker was unlucky to be run out at the non-striker’s end. Mark Wood dismissed Harry Tector for a duck.

In response, England was down to 29-3 in 5.1 overs, losing Buttler for a two-ball duck in a significant blow. Joshua Little (2-16) then struck again as Alex Hales was out caught for seven runs.

Dawid Malan scored 35 off 37 balls to hold the innings together. He put on 38 runs with Harry Brook (18). Moeen Ali scored 24 not out off 12 balls toward the end, but rain thwarted his plans.

“We know the way England plays and we wanted to create chances. If we took our chances, then we would have a shot,” Balbirnie said. “We haven’t played a game here, and to come and play the tournament favorites, and put on a show is very satisfying.”

England retained the same starting XI that opened the Super 12 stage with a five-wicket win over Afghanistan in Perth last weekend. The Irish made one change, with Hand coming in for batting allrounder Simi Singh.

Ireland lost its first game in the second round by nine wickets to fellow qualifier Sri Lanka in Hobart. Ireland advanced as the second-place finisher in its preliminary group to join the top eight teams and three other qualifiers in the Super 12s.

Defeat pushed England down to third in its group with Ireland fourth. Ireland will play Afghanistan next at the MCG on Friday when England will take on defending champion Australia.

New Zealand, which beat Australia in its opening game, has three points and tops its six-team group. Afghanistan is still bottom with one point after losing its opener against England.