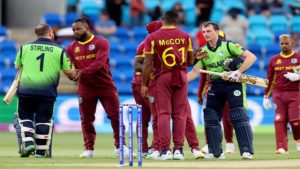 Opener Paul Stirling steered Ireland to an upset nine-wicket win over the West Indies on Friday, knocking the two-time champions out of the Twenty20 World Cup in the preliminary phase and earning his team a spot in the Super 12s.

Zimbabwe beat Scotland by five wickets and qualified for the Super 12s for the first time after finishing top of Group B with a better net run rate than Ireland.

Zimbabwe will join India, Pakistan, South Africa, Bangladesh and the Netherlands in Group 2. Ireland will be in a potentially tougher Group 1 with defending champion Australia, England, New Zealand, Afghanistan and Sri Lanka.

Stirling had been struggling with the bat but returned to form with a composed 66 from 48 balls to help Ireland reach 150-1 in reply to the West Indies’ total of 146-5, reaching the victory target with 15 balls to spare.

He and skipper Andy Balbirnie (37) put on 73 from 45 deliveries to get the run chase away to a positive start and then he combined in an unbroken partnership of 77 with Lorcan Tucker, who capped an unbeaten 45 by hitting the winning boundary.

Ireland missed out on a spot in the second round at the 2021 World Cup and started this edition with a loss to Zimbabwe.

The Irish were struggling in their second game against Scotland, too, before rallying to win by six weeks and take some momentum into the winner-takes-all contest against the West Indies. Now they’re back in the second round for the first time since 2009.

“Losing the first game and then coming back and beating a two-time champion in a must-win game … couldn’t be prouder,” Balbirnie said. “Pretty emotional finish to the game, just delighted with the group. Really proud day to be Irish.”

“It’s a dream come true,” Delany said. “Incredible day for us. To get over the line, in the fashion that we did, is amazing.”

West Indies skipper Nicholas Pooran said his team didn’t make the most of the ideal conditions after winning he toss and batting. Brandon King’s 62 from 48 balls was the only standout innings in the last game of what was a a disappointing tournament for the West Indies, who opened with an upset loss to Scotland before rebounding to beat Zimbabwe.

“We haven’t batted well in this tournament at all,” Pooran said. “On a really good batting surface, making 145, to ask the bowlers to defend that was always going to be a challenge.

The West Indies are the only team to win the world T20 title twice. Defending champion Australia will be aiming to amend that statistic and starts the Super 12 stage against New Zealand on Saturday.

Scotland chose to bat first but was restrained by Zimbabwe’s pace and spin to 132-6. Tendai Chatara returned impressive figures of 2-14 and off-spinner Sikandar Raza (1-20) didn’t concede a boundary in his four overs in the middle of the innings.

Opening batter George Munsey made a hard-fought 54 off 51 balls with seven boundaries. He holed out at deep backward square leg in the 17th over in a return spell for Richard Ngarava (2-28).

Captain Craig Ervine (58) and Raza (40) anchored Zimbabwe to 133-5 in reply with nine balls to spare. Scotland struck within the first two overs and had reduced Zimbabwe to 7-2 but Ervine and Raza batted resolutely before both fell late in the chase.

Raza was caught behind against the bowling of Josh Davey (2-16) and Ervine chipped an easy catch at long off with Zimbabwe still needing 14 more runs.

Ryan Burl, however, raised the victory in style with a boundary over mid on against Safyaan Sharif as Zimbabwe sealed its place in the Super 12s.

“I don’t think anyone could explain what it means,” Ervine said. “We’ve had the whole country behind us. The cricket we’ve played coming into the tournament has been special.”