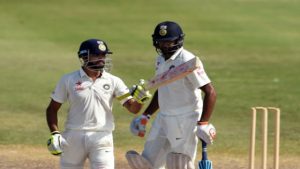 NORTH SOUND, Antigua and Barbuda (AFP) — Indian captain Virat Kohli won the toss and decided to bat first against the West Indies on the first day of the first Test at the Sir Vivian Richards Satdium in Antigua on Thursday.

West Indies have not defeated India in Test cricket for 14 years since the end of the 2002 series in the Caribbean and are the decided underdogs for the first meeting with these opponents on home soil for five years.

Roston Chase, the 24-year-old batsman from Barbados, has been selected for a Test debut in a West Indies line-up that includes two frontline bowlers in pacer Shannon Gabriel and leg-spinner Devendra Bishoo alongside medium-pace bowling all-rounders Jason Holder, the captain, and Carlos Brathwaite.

India have opted for a bowling attack comprising three pacers and two spinners, omitting Ravindra Jadeja in preference to Amit Mishra to work in tandem with Ravichandran Ashwin as a specialist slow bowler.

West Indies’ last Test series was a 2-0 defeat in Australia at the end of 2015 while India’s previous campaign was a 3-0 home drubbing of South Africa that ended in early December.