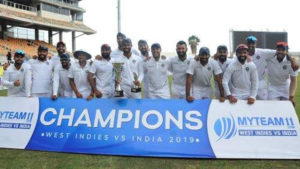 The outmatched hosts, who lost the first Test in Antigua and Barbuda by 318 runs, continued yesterday from their overnight 45-2 in search of a mammoth 468 runs for a highly improbable victory.

There were fleeting spells of resistance, but ultimately the brittle West Indies batting could not contend with the vaunted Indian bowling attack, crumbling from 159-4 to be all out for 210 in the second session of the fourth day.

The 30-year-old Shamarh Brooks top scored with 50 before he carelessly got run out, with skipper Jason Holder (39) and Jermaine Blackwood (38), who entered as a concussion substitute for the ailing Darren Bravo, offering support.

The game was set up for world top-ranked India from the first innings. Led by a century from player-of-the-match Hanuma Vihari, their measured approach after losing the toss and being asked to bat first on a grass-covered pitch, saw them compiling 416.

Inspired by fast bowler Jasprit Bumrah, they then scythed through eighth-ranked West Indies to seal a 299-run first-innings lead. From there India were always in command despite pacers Kemar Roach and Holder bowling well throughout.

“They are a quality side, they played some really good cricket,” Holder said during a post-game television interview.

“They knew our bowling was pretty strong and they made us work really hard for wickets, and they made us spend long periods on our feet. Obviously, when we got the chance to bat we didn’t bat well enough. That’s the quality of good sides, they tend to play the patience game quite well,” the regional side captain explained.

Virat Kohli, the India captain, praised the all-round effort which led to the resounding win with a day to spare.

“Pretty comprehensive again. I think we played really good cricket over the four days. Getting the result in the manner we want is very crucial for us as a team. We were put under pressure in couple of sessions in this game — while we were batting there were some tricky situations, but it took a lot of character from the boys collectively,” Kohli said.

Yesterday’s play began with Bravo not out on 18 and Brooks on four.

But in the fourth over of the morning, immediately after assertively driving Bumrah to the cover boundary, the left-hander Bravo retired hurt on 23.

There was soon confirmation that the 30-year-old was affected by a blow sustained to the back of the helmet from a Bumrah bouncer in the last over of play on Sunday.

Given recently adopted guidelines governing the utilisation of a concussion substitute, the sidelined batsman Jermaine Blackwood was brought in as replacement.

Roston Chase, the player to come out upon Bravo’s exit, did not last long, falling leg before wicket to Jadeja for 12.

It was 98-4 when left-hander Hetmyer (one) — not for the first time in his fledgling career — went tamely, driving into the hands of cover fielder Mayank Agarwal off pacer Ishant Sharma.

That made way for Blackwood, 27, who last played a Test in late 2017 away to Zimbabwe, to enter the fray in unusual circumstances.

He pleased West Indies fans briefly, as he and Brooks briskly added 61 runs, making best use of conditions in which the ball failed to zip around as it did in the first innings on Saturday afternoon when Bumrah blew away the home team’s top order.

Blackwood was typically dashing on a wearing pitch offering grip and bounce for spin bowlers, though before he got off the mark, he got a break when wicketkeeper Rishabh Pant failed to gather a nick from Jadeja’s turning delivery.

He was eventually sent back to the pavilion by Bumrah, offering a catch behind the wicket.

Brooks, in his second Test, played a number of crisp drives on both sides of the wicket, but he was also lucky.

When on 30, he got a reprieve when he edged a ball from Jadeja to Ajinkya Rahane at slip only for replays to show the left-arm spinner had overstepped.

He went on to reach 50, but gave away his wicket soon after, casually moving back to his crease after aborting a single and caught short by Kohli’s acrobatic throw.

From 177-6 it was a rapid downward spiral for the hosts, without a point in the newly introduced Test Championship. Holder was last man out, missing an agricultural swipe to Jadeja and hearing the death rattle behind him.