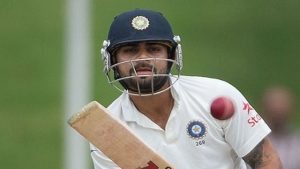 Kumble was appointed by the Indian Cricket Board (BCCI) last week despite having never coached an international team. India will have little time to settle in before they take on the WICB President’s XI in a two-day game at Warner Park here starting Saturday.

The fixture will be followed by another three-day game at the same venue, also against the President’s XI from July 14-16. India and West Indies will then lock horns in the opening Test at the Vivian Richards Cricket Stadium from July 21-15.

Tests will also be played at Sabina Park in Kingston from July 30 to August 3, at the Darren Sammy National Stadium from August 9-13, with the final Test carded for Queen’s Park Oval in Port of Spain from August 18-22.

West Indies have not beaten India in a Test match in 14 years, losing the last five series home and away. Their last triumph came in 2002 when Carl Hooper’s side beat the tourists 2-1 in a five-Test Home Series.