Home / Sports / In Game 1 of Rockets-Warriors, no one was happy with the officiating

In Game 1 of Rockets-Warriors, no one was happy with the officiating 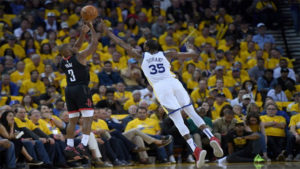 Following the Golden State Warriors’ narrow 104-100 victory over the Houston Rockets on Sunday in Game 1 of the Western Conference semifinals, both sides had an issue with how their superstars were officiated.

On at least four occasions during the contest, the Rockets felt like James Harden was blatantly hit while shooting a 3-pointer. And the most controversial no-call occurred with 9.1 seconds remaining in the game with the Rockets down three. Harden pulled up for a triple from the top of the key and there was contact between him and Draymond Green on the follow-through, but there was no whistle.

In the Rockets’ locker room, the chatter centered around their lack of calls on field-goal attempts. Rockets coach Mike D’Antoni said the officials acknowledged missing a few of those calls, but that didn’t ease Houston’s aggravation.

“I just want a fair chance, man,” a frustrated Harden said at the podium after scoring 35 points on 9-of-28 shooting. “Call the game how it’s supposed to be called and that’s it. And I’ll live with the results. But especially we all know what happened a few years back with Kawhi [Leonard]. That can change the entire series. Just call the game the way it’s supposed to be called and we’ll live with the results. It’s plain and simple.”

“When you land three feet ahead of where you shoot the ball from, that really ain’t my issue,” he said. “So it is what it is.”

The Rockets’ Chris Paul picked up his first technical late in the third quarter after arguing for a foul call on a 3-pointer he converted and was ejected in the closing seconds of the game as he appeared to have made contact with the official while arguing that Klay Thompson attempted to trip him.

“If there was [contact with the official], I haven’t seen it yet,” Paul said.

In the Warriors’ locker room, players were annoyed with the narrative that they were on the receiving end of good fortune from the referees, and Stephen Curry was cited as an example of someone who did not benefit from the officiating.

Curry logged 37 minutes and produced 18 points and a key late triple over Nene, but he finished with five fouls. The Warriors’ grievance: Curry wasn’t allowed to play the type of defense his opponents play against him.

“That’s my biggest issue with a superstar like Steph, and I know Steph’s mindset,” Andre Iguodala told Yahoo Sports. “His mindset is, ‘OK, this is how we’re playing. We’re playing physical. I’m just getting slapped and held and pulled down every time and I’m getting two hands on my drives. This is what the refs are allowing. So, they’re letting us play.’ So when he’s guarding, he’s like, ‘OK, I can play this way,’ and then when he’s guarding it’s [whistle, whistle]. And then he’s like, ‘Damn, now I got three fouls.’ People always ask why he’s fouling, but that’s how he’s being guarded, so why wouldn’t he think he can’t play physical like that?”

Curry, in a diplomatic manner, explained how he’s handling the way he’s being officiated.

“It just depends on how they want to call it and if it’s tight or lose, considering how much people hold and grab and what they can get away with,” Curry told Yahoo Sports. “We did a good job on James tonight in just trying to maintain our space. But we still had some boneheaded fouls where he was driving and we were reaching in. But for the most part, my fouls were ones that I can avoid. But from game to game, it’s just an adjustment I try to figure out. I try not to get too frustrated because I know how it goes. I can’t let that distract me from being aggressive and making plays. But at the end of the day, I just try to separate the two of offense and defense, and try to keep myself out of trouble on the defensive end and just play basketball.”

The commentary leading up to Game 2 on Tuesday will surely be about the officiating, with heavy emphasis on how Harden and Curry will be handled. It will be telling to see if the criticism of the officials leads to a dramatically different officiating style Tuesday.

“My brother is a referee,” Iguodala told Yahoo Sports. “He’s on the cusp of trying to get to the next level and I ask him a lot of questions. More times than not, he’s saying the referees are right. But my questions to him, and this is the one that gets him, is how do teams guard Steph and Klay [Thompson]? And he says, ‘Oh, they get hacked every time. He says Steph gets fouled 80 percent of the possessions that he’s in. He’s getting held, he’s getting pulled. They just hold him down.’ And teams are like, just get physical with him. We see all the memes where somebody is just knocking Steph down and it’s funny, right? But you never see it on the other side. You don’t see us knocking other people down and it becoming something because it’s just a foul. Foul, foul, foul, foul, foul.”