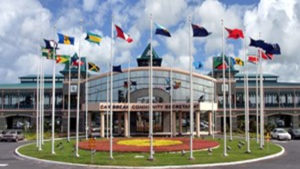 The tourism-dependent Caribbean region is expected to suffer more than many of its neighbors in Latin America as a result of the coronavirus pandemic, the International Monetary Fund (IMF) outlined during its 2020 Spring Meetings.

Alejandro Werner, head of the IMF’s Western Hemisphere department, said in a regional briefing that he sees a “lost decade” for Latin American and the Caribbean, and a situation where Caribbean nations will be “severely affected.”

About half of the 16 countries in the Americas seeking emergency assistance from the IMF are in the Caribbean, Werner said.

“They need extra support. That’s why we’re working extremely fast to try to deploy these rapid emergency financing instruments to the countries in the Caribbean,” he said.

The IMF sought to double the size of its rapid financing instruments so it could quickly deploy resources to countries under extreme duress like those in the Caribbean.

“Now we’re working to help them to fund their current needs, given the significant shocks through the disappearing of tourism in the last four weeks and that we continue in the next few month,” Werner said. “We will continue to work with the region, depending on how the situation evolves, to find the best solutions to their problems.”

In its 2020 World Economic Outlook, the IMF said it expects GDP in Latin American and Caribbean to fall 5.2% in 2020. Werner said the decline could be worse in the Caribbean.

IMF Managing Director Kristalina Georgieva said at the press conference to open the meetings on April 17 that the fund has already approved loans for countries in the Caribbean and is looking at what else it can do.

On April 15, the heads of government of the Caribbean Community (Caricom) agreed to go together to international lenders to borrow money to cover fiscal from the crisis.

On April 16, Jamaica asked the IMF for funding from the rapid financing instrument, saying the economic spillover from the coronavirus pandemic poses “intolerable balance of payment risks” and threatens to undo seven years of reforms.

In November 2019, Jamaica concluded a reform program with the IMF with a $1.66 billion stand-by facility, bringing down its public debt by about 50% of GDP from 145%, according to the fund.