‘I’m on the climb, still’: Stunning Serena sweeps past Sevastova into 9th US Open final 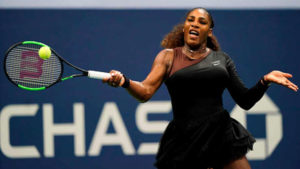 Six-time champion Serena Williams claimed 12 of the final 13 games en route to a straight-set victory over Anastasija Sevastova and a trip to her 31st Grand Slam championship match at the 2018 US Open.

23-time Grand Slam champion Serena Williams of the United States soared into the 31st Grand Slam final of her career, and her ninth US Open final, with a comprehensive 6-3, 6-0 defeat of No.19 seed Anastasija Sevastova of Latvia on Thursday night at the 2018 US Open.

“Honestly, it is remarkable, I couldn’t have predicted this at all,” Williams told the media during her post-match press conference. “I just feel like there’s a lot of growth to still go in my game. That’s actually the most exciting part.”

In the first meeting between the two players, Williams erased an 0-2 start to dominate the remainder of the match, winning 12 of the final 13 games to race into the title match after only 65 minutes of play. It is her second Grand Slam final of the year following her finalist run at Wimbledon earlier in the summer.

“I got a little emotional out there because last year I was literally fighting for my life in the hospital,” a pensive Williams stated. “I think I was on my fourth surgery by now. What is today? I was on my third surgery. I had one more to go still.”

“To come from that, in the hospital bed, not being able to move and walk and do anything, now only a year later, I’m not training, but I’m actually in these finals, in two in a row. Like I said, this is the beginning. I’m not there yet. I’m on the climb still.”

17th-seeded Williams charged to the net with purpose throughout the match, overcoming Sevastova by winning 86 percent of the points when she moved forward and firing 30 winners to 20 unforced errors. After her hot start, Sevastova faded, and managed to win only four of her 22 second service points throughout the tilt.

“I knew playing against [Sevastova], I felt like I needed to get to the net a little bit more,” Williams explained. “I know how to play at the net. I have great volleys, or else I wouldn’t have won so many Grand Slam doubles titles. I know how to do it. It’s just the fact of turning it on and actually doing it. Somehow it worked tonight. I actually did it. I’ve been training on it, practicing it, and it came together.”

In the 2018 US Open championship final, Williams will face first-time Grand Slam finalist Naomi Osaka of Japan, the No.20 seed. Osaka outplayed last year’s finalist Madison Keys of the United States, the No.14 seed, in the second semifinal of the night. Williams lost her only previous meeting against Osaka, in straight sets, in the first round of the Miami Open earlier this season.

“I lost to Naomi last time we played, but I definitely wasn’t at my best,” Williams said about her prior encounter against Osaka, which was in her WTA second event contested after giving birth to her daughter Olympia. “Again, I’m still in that climb.”

Sevastova stunned Williams in the first game of the match, staying consistent and calm while leading the American into miscues, causing Williams to drop serve. The Latvian’s groundstrokes started on point, and after a winning backhand passing shot to hold for 2-0, it appeared that the opening set would be a complicated affair.

But Williams started to find more pace on her shots as the set wore on. After a quick hold for 2-1, the American maneuvered through a close game to break Sevastova for 2-2 on her third break point, leveling the set at 2-2 after Sevastova pushed a backhand drop shot, her signature shot, into the net.

Williams started to roll from there, dominating with pinpoint overheads and putaways any time Sevastova tried to send balls beyond the American when she came to net. One of those overhead winners polished off the five-game winning streak which she used to reach 5-2 after the tough start.

In the next game, Williams fired her third ace of the set to reach double set point, and on the next point, a powerful forehand forced a wide error from Sevastova to seal the opening frame, having won six of the final seven games. Williams moved forward a substantial amount in the first set, and it paid off for her, going 15-for-18 in the forecourt.

It was smooth sailing for the former World No.1 in the second set, as she raced to victory by continuing to dominate at net, going 13-for-14 in the set. Sevastova clawed back from 0-40 to deuce in her first service game, but Williams claimed a fourth break point with a beautiful forehand volley, and converted it by chasing down a drop shot to force an error.

At 2-0, the Latvian fired her first ace to reach 30-0, but even that would not be enough on the day, as Williams blasted stunning service returns to claim four points in a row and garner a double-break lead for 3-0. Another return winner on break point at 4-0 allowed the American to pick off the first five games of the set.

Serving for the match, Williams’ quest for the second-set whitewash would not be denied, powering through the game and clinching victory on her second match point with a forehand winner, as the crowd in Arthur Ashe Stadium cheered on the legendary champion.