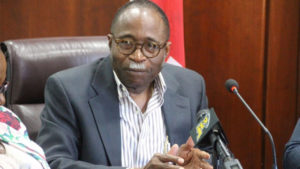 Opposition member Julian Fraser has said he believes implementing a Freedom of Information Act will not make a difference in relation to having access to information in the British Virgin Islands.

Fraser made the statement while responding to questions during a press conference in Road Town on Wednesday.

“I have a serious issue with this Freedom of Information Act that people are asking for. Is it just something that is being asked for just for the sake of asking? Do we have an issue with getting information? I am not convinced that it is going to make a difference,” the senior legislator said.

“I don’t think that there is information out there that people need and they cannot get. Everything is gazetted. I don’t think you are going to get any more information with this Act. But, I agree that it should be introduced and passed and I am sure that it is coming. But you would have to tell me from people from the media whether or not you are having problems in getting information,” Fraser added.

Governor’s take on the issue

In a recent unrelated press conference, Governor Augustus Jaspert said residents should hold their elected representatives accountable to get the constantly-promised Act implemented.

The Act has been a constant fixture in the Speech from the Throne, which is a public address made by a sitting governor to outline the legislative agenda of the elected government.

The Freedom of Info Act/Bill

If the Bill is ever introduced and formally passed, it will include ‘guidelines on how persons can access public records without any exemptions’, Governor Jaspert had said back in March.

The Bill is also expected to include recommendations for the establishment of a Freedom of Information Unit, which will provide the public with ‘the appropriate administrative mechanism to make and receive requests’.

While he was Opposition Leader, Andrew Fahie, said he would implement the law if his Virgin Islands Party is elected into office. It is now left to be seen if Fahie, who is now the Premier of the British Virgin Islands, will keep his word.