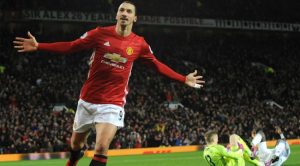 The Swedish striker signed another one-year deal with United on Thursday, returning to the English club that released him during the summer while he recovered from a serious right knee injury.

“I am back to finish what I started,” Ibrahimovic said.

The 35-year-old Ibrahimovic sustained the injury in a Europa League quarterfinal match against Anderlecht in April, ruling him out of the last month of the season. He was on crutches during United’s victory over Ajax in the Europa League final in Stockholm.

He has been undergoing rehabilitation at United over the summer and has shown enough positive signs in his recovery to convince the club he is worth a new contract.

United didn’t say when Ibrahimovic is expected to be back in action, although manager Jose Mourinho said the striker “will be important in the second part of the season.”

On Sunday, however, Ibrahimovic posted a video on Instagram of himself kickboxing, during which he kicked a punch bag hard with both legs. Alongside the video was a message: “Which knee?”

“It was always mine and the club’s intention for me to stay,” Ibrahimovic said. “I cannot wait to get back out on that Old Trafford pitch, but I also know that I have to take my time to make sure that I am ready.”

Ibrahimovic will wear the No. 10 shirt vacated by club captain Wayne Rooney, who joined Everton in the offseason.

It appeared United had moved on from Ibrahimovic by signing Romelu Lukaku for 75 million pounds (then $97 million) from Everton in July.

Lukaku has started his Old Trafford career by netting four goals in his first three competitive games. But he will soon have some competition in attack from a player who top-scored for United last season with 28 goals in 46 appearances, including a double in a 3-2 win over Southampton in the English League Cup final.

“We are delighted Zlatan is on the road to recovery,” Mourinho said, “and we are equally delighted to have his ambition and experience back with us.”