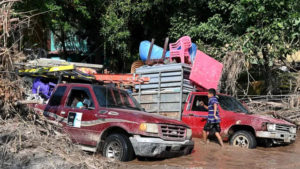 Forecasters said Iota continued to show signs of strengthening and could be a catastrophic Category 5 hurricane by the time it reaches Central America.

Evacuations were being conducted from low-lying areas in Nicaragua and Honduras near their shared border, which appeared to be Iota’s likely landfall. Winds and rain were already being felt on the Nicaraguan coast Sunday night.

The hurricane center said Iota had maximum sustained winds of 145 mph. It was centered about 170 miles southeast of Cabo Gracias a Dios on the Nicaragua-Honduras border and moving westward at 10 mph.

Iota became the 13th hurricane of the season, two shy of the record 15 set in 2005 but the record-breaking 30th named storm of this historic hurricane season.

Daniel Brown, a meteorologist with the National Hurricane Center, said Iota is forecast to be an “extremely dangerous” Category 4 hurricane with sustained winds of at least 130 mph when it approaches Central America.

The core of Iota was forecast to move across the Caribbean on Sunday and make landfall in northeastern Nicaragua and eastern Honduras on Monday night, the Hurricane Center said.

Eta was a Category 4 storm when it made landfall in Nicaragua on Nov. 3 before tearing a wide path of destruction through Honduras and Guatemala the next day. Entire communities remain underwater.

Eta also swept across much of the U.S. south, dumping heavy rain across parts of Florida, Georgia and the Carolinas after landfall Thursday north of Tampa Bay.

“It is possible that Iota could track north of Honduras, allowing the areas hardest hit by Hurricane Eta to be spared,” said AccuWeather Senior Meteorologist Rob Miller. “But it’s even more likely that Honduras and Nicaragua take a direct hit from Iota.”

Nicaragua and Honduras issued hurricane warnings amid concerns that some already sodden areas of those nations could be swamped by a storm surge of up to 15 feet and rainfall totals of up to 3 feet.

“This rainfall would lead to significant, life-threatening flash flooding and river flooding, along with mudslides in areas of higher terrain,” Brown said.

Iota’s name marks the deepest the NHC has ever gotten into the Greek alphabet during one storm season. Just days ago, 2020 set the record for the most storms to be named in one Atlantic hurricane season with Theta, number 29. Theta has eased to tropical depression status, drifting in an area between the Azores and Canary Islands.